BC Hockey League has delayed a decision on cancelling its season as talks continue with the provincial health officer and ministry of health.
Mar 5, 2021 8:22 PM By: Mario Bartel 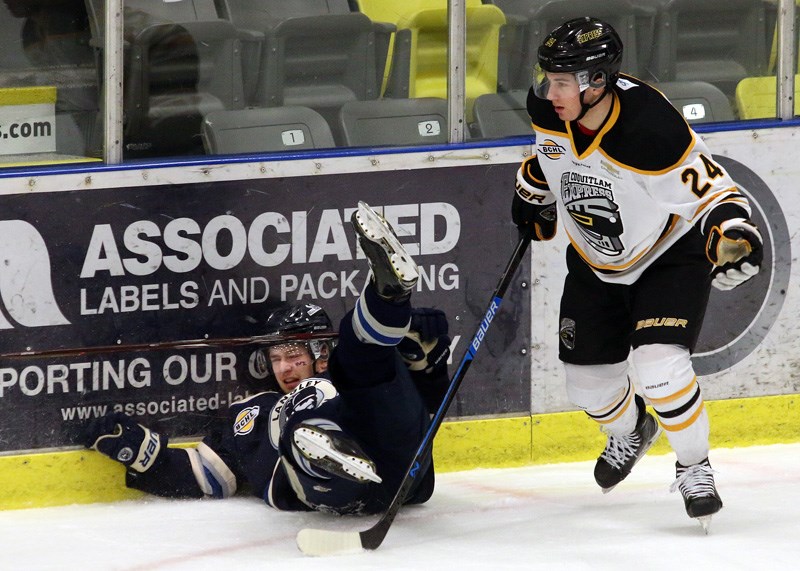 The Coquitlam Express swept the Langley Rivermen in the first round of the 2019/'20 BCHL playoffs before the league cancelled the remainder of the season last March because of the COVID-19 pandemic.MARIO BARTEL/THE TRI-CITY NEWS FILE PHOTO

The curtain hasn’t dropped on a BC Hockey League season — yet.

In Tweet posted by the league Friday, it said a vote by its board of governors to cancel the season has been put off while discussions continue with the provincial health officer on a plan to resume play.

Earlier, BCHL commissioner Chris Hebb had suggested if the league didn’t get permission to get back on the ice by March 3, it was prepared to pull the plug the next day.

Coquitlam Express general manager told the Tri-City News time is running out for the league to play any kind of meaningful games as many of the arenas teams play in are municipal facilities that must soon be converted to summer uses like lacrosse. The 17 BCHL teams based in B.C. have been limited to just socially-distanced practices since Nov. 19 because of public health orders banning events and indoor gatherings. The league’s single U.S.-based team, the Wenatchee Wild, went on hiatus last fall because of the border closure.

After delays to the opening of training camps and the start of the season, the BCHL was able to convene a makeshift schedule of exhibition games played in regional cohorts of nearby rivals to limit travel. It lasted about six weeks before rising rates of COVID-19 in the Fraser and Vancouver Coastal health regions forced teams in those areas off the ice on Nov. 8. Those orders were then extended to the rest of the province 11 days later.

Since then, teams have been able to practice with an emphasis on individual skills and drills. Under Phase 2 of return to play guidelines devised by viaSport, the governing body for amateur sports in British Columbia, even scrimmages aren’t allowed.

Campbell said the monotony of endless practice has taken a toll at every level of the organization.

“You can only do so many drills, you can only show up at the arena so often and not have games, “ he said, adding his players were getting a much-needed week away from the arena as they await word on the fate of their season.

Reports suggest the BCHL has plans for a 20-game season to be played in five regional pods.

But on Tuesday, provincial health officer Dr. Bonnie Henry said her office and the ministry of health were continuing discussions with the league about its plan, but there was “a number of concerns.”

Wednesday, the Western Hockey League announced its five teams based in British Columbia has received approval to begin playing their seasons March 26, with games occurring in two hubs, Kamloops and Kelowna.