Coquitlam's Brendan Batchelor was hoping to be calling Vancouver Canucks' playoff games this month. Instead, he's baking
Apr 18, 2020 10:20 AM By: Mario Bartel 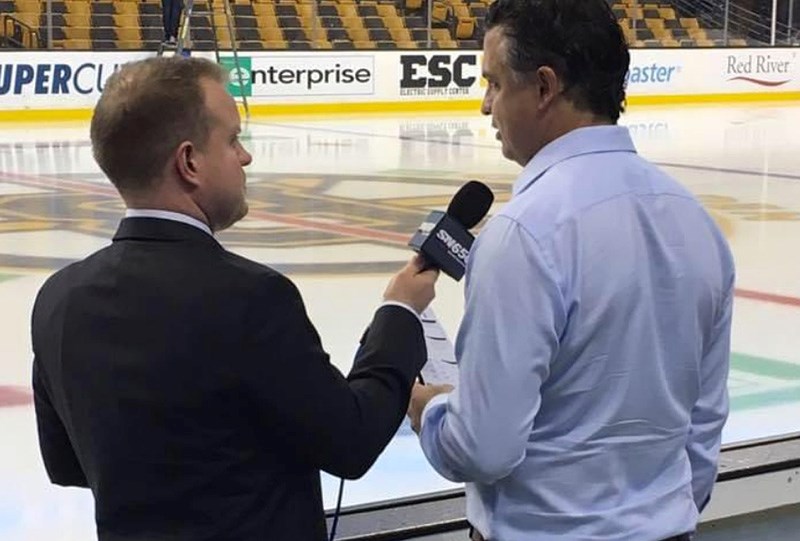 Vancouver Canucks broadcaster Brendan Batchelor, who grew up in Coquitlam, interviews the team's coach, Travis Green, prior to ths suspension of the NHL season because of the COVID-19 pandemic.TWITTER

That Coquitlam broadcaster Brendan Batchelor would be baking up a batch of chocolate chip cookies in April is not unusual.

After all, the voice of the Vancouver Canucks’ radio broadcasts was usually into his offseason by the middle of the month as the team hasn’t made the playoffs since he got the gig in 2017.

But this season was going to be different, Batchelor said.

The Canucks were in the thick of a playoff race when the COVID-19 public health crisis stormed the North American continent and the team was about to play a key game against the Arizona Coyotes in Phoenix when the season was abruptly halted on March 12.

Batchelor said the swiftness of hockey’s shutdown, along with all other sports, still haunts him.

Batchelor, who developed his love for play-by-play calling commentary during road hockey games in the driveway of his parents’ home on Harbour Drive in Coquitlam, said his disappointment at being suddenly silenced is compounded by the excitement around a young Canucks team that was exceeding expectations. At one point of the season the strong efforts of players like Quinn Hughes, Elias Pettersson, T.J. Miller and Jacob Markstrom had them in first place in the Pacific division.

“This past season was the most enjoyable I’ve had yet because the team was in the conversation,” he said. “They were playing meaningful games.”

Batchelor said the energy of the players competing for a playoff spot is infectious, invigorating the fans all the way up to his broadcast perch high above the ice surface.

“There was a buzz around the building,” he said.

The silence since the shutdown has been deafening.

“Hockey, and sports in general, are such great escapes for people,” Batchelor said. “The Canucks bring people a lot of excitement and joy.”

When — and whether — that excitement can be rekindled sometime this summer is still up in the air. The fate of the National Hockey League’s plan to finish the season and fire up the playoffs depends on the pandemic’s progression over the next several weeks.

Batchelor said he’s hopeful. But he admits calling games in July or August would be disorienting.

“Having playoff hockey to talk about in the summer would be very different,” he said.

In the meantime, Batchelor fills his time going for walks with his wife, a teacher in SD43, binging on Netflix, and baking “pretty much anything with chocolate chips in it.”

In other words, he said, “if feels like the offseason.”