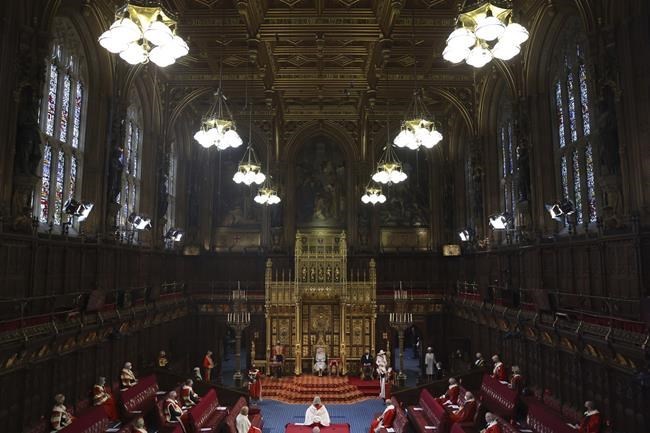 LONDON (AP) — The U.K. government sought to capitalize on its electoral strength Tuesday, outlining a sweeping legislative agenda to bolster the economy after the COVID-19 pandemic, defuse tensions that threaten the country’s unity and combat social issues ranging from housing to care for older adults.

The package of about 30 bills was unveiled by Queen Elizabeth II in the annual Queen’s Speech, in which the monarch reads out the government’s legislative priorities at the ceremonial start of the new parliamentary session.

The event, pared down for pandemic times, was the queen’s first major public appearance since the funeral of her husband, Prince Philip, last month. A single throne was placed beneath the gold canopy for the monarch. In times past, there were a pair of thrones — one for the queen and another for her consort.

“My government’s priority is to deliver a national recovery from the pandemic that makes the United Kingdom stronger, healthier and more prosperous than before,” the queen said in the House of Lords.

The queen, who did not wear a mask, was escorted into the chamber by her son, Prince Charles. She delivered the speech slowly and deliberately before a socially distanced audience, all of whom needed to have a negative COVID test in order to attend.

The queen did not wear her crown. Instead, it was carried into the chamber ahead of her on a cushion.

Prime Minister Boris Johnson and his Cabinet put together the list of proposals after a year of lockdowns and COVID-19 restrictions triggered the U.K.’s deepest economic slump in three centuries. The government is also facing renewed calls for Scottish independence and unrest in Northern Ireland fueled by Britain’s departure from the European Union.

Johnson will pursue the agenda from a position of strength, with his Conservative Party holding 365 of the 650 seats in the House of Commons. That electoral power was underscored last week, when the Conservatives dominated local elections in England.

Ahead of the speech, Johnson announced plans to give all adults access to four years of university or job training throughout their lifetimes as part of an effort to ensure workers have the skills employers need in a changing economy. The government also plans to revamp planning laws to speed up construction of new homes.

“These new laws are the rocket fuel that we need to level up this country and ensure equal opportunities for all,” Johnson said in a statement released ahead of the speech. “We know that having the right skills and training is the route to better, well-paid jobs.”

The opposition Labour Party said the government must also come up with a plan to create jobs if the training program is to have any meaning. Labour has previously criticized the government for boosting job creation figures with part-time and low paying jobs.

The legislative program also includes plans for a summit meeting between leaders of the U.K. government and the devolved administrations of Northern Ireland, Scotland and Wales to discuss issues caused by the pandemic. The government also said it would invest in transport links between the U.K.’s four nations and reiterated a commitment that all parts of the country would benefit from a 4.8 billion pound fund to improve town centers and local transport projects.

In addition, the government plans to require voters to show a photo ID before they cast their ballots and ban so-called gay-conversion therapy. Though the government pledged to restrict the prosecution of soldiers who served during the conflict in Northern Ireland, it didn't offer legislation to implement the promise.

One of the most controversial elements of the government’s program is a crime bill that stalled in the last parliament amid concern that it gave police too much power to restrict public protests.

Police were criticized for being too lenient after environmental protesters shut down central London last year and for being too heavy handed in March when they broke up a vigil for a young woman who was murdered after being kidnapped in the capital.

The government also promised to bring forward proposals to reform the social care system, which provides in-home and nursing home services for older people. That fell short of demands from advocates for concrete proposals to resolve the long-running problem.

The issue has vexed government for more than a decade as rising costs squeeze local governments, which are required to provide care for those who can’t afford it, and leave wealthier families in fear of losing their homes as they struggle to pay for the care of aging relatives.

In comments later in the House of Commons, Johnson committed to holding an inquiry into the government’s handling of the COVID-19 pandemic amid public pressure to investigate lapses in hopes that they are not repeated. Johnson has previously resisted the idea, saying an inquiry would be a distraction to officials tackling the pandemic.

Johnson told the House of Commons that the inquiry would take place within the new session of Parliament, which opened Tuesday. Parliamentary sessions typically last a year.

“I can certainly say that we will do that within this session,” Johnson told lawmakers. “I have made that clear before."