Police have mounted an all-out, joint effort to end the "scourge" of gang violence in Metro Vancouver that has seen deadly shootings in public places in recent weeks, British Columbia's solicitor general says.
May 14, 2021 2:04 PM By: Canadian Press 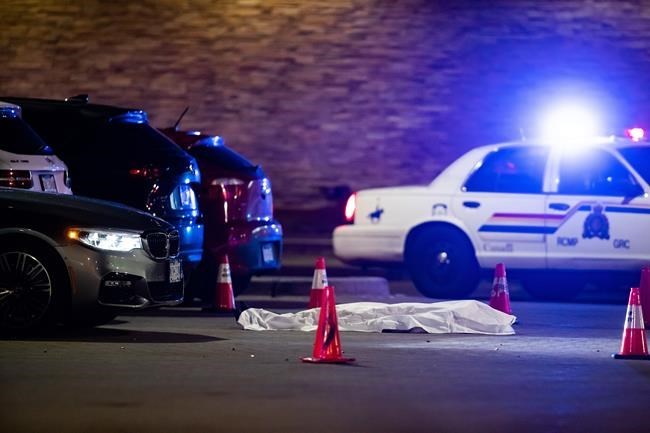 Police have mounted an all-out, joint effort to end the "scourge" of gang violence in Metro Vancouver that has seen deadly shootings in public places in recent weeks, British Columbia's solicitor general says.

Mike Farnworth said Friday, a day after meeting with top police officials, that they assured him they would use all available tools to end gang violence.

"They are absolutely committed to suppressing this cycle of violence," he told a news conference from his home in Port Coquitlam. "This is job No. 1. This is their top priority."

He made the comments just hours after another public shooting that left one person dead and two others hurt in the parking lot of a busy shopping area in Burnaby, B.C.

Integrated Homicide Investigation Team spokesman Sgt. Frank Jang said Friday that all three people were believed to be the targets of the shooting.

The victim, Jaskeert Kalkat, 23, was known to be affiliated with gang activity, he said.

The two people injured, a man and a woman in their 20s, remain in hospital with serious injuries.

"They wage war on us, the community, and all that is decent about our community when they open fire in North Langley at a skating complex where there's a daycare, putting young children and parents in danger," Jang said.

There have been 11 shootings in B.C.'s Lower Mainland in less than a month, seven of them deadly and many of them in public places, including shopping centre parking lots, outside restaurants and outside the international departure terminal at Vancouver's airport.

Three fatal shootings have occurred in the past week, two of them in Burnaby. Police have laid a first-degree murder charge in the death of a man in Burnaby on Saturday.

On Sunday, an RCMP officer in a police cruiser caught up with a getaway vehicle in the airport shooting, but suspended the chase when someone fired shots, hitting the police vehicle.

"We don't want further violence, but let us be clear. For those who are involved in this, we are coming after you. We are coming after every single one of you. And if you are complicit, you are aiding and abetting," Jang said.

Despite many of the victims being known to police, or being known to have gang affiliations, Jang said he wouldn't classify this as a "gang war." He said the term "war" should be used with respect for soldiers who go off to a real war.

"This is not a war. These are reckless young men who happen to have access to very dangerous weapons, who are using our public streets to conduct revenge killings based on money, drugs, (and) other motives."

Farnworth said police chiefs told him the RCMP, municipal forces and gang, homicide and crime units are working together to "deal with this scourge that is taking place right now."

"These gangsters, there's only two ways this is going to end. It's either jail or they're dead. If they're dead they're not mourned by anybody but their family because they're forgotten by everybody else."

A joint statement released Friday and signed by a dozen police leaders says the partnership with policing agencies in the region on the gang-violence issue is unprecedented.

The statement says an intelligence-led enforcement effort is underway, which includes overt and covert operations, targeting people who pose the highest risk to public safety and increasing interaction with those involved in gangs.

Farnworth urged citizens who had any information about gang violence to contact police and warned gang members they face a dark future of incarceration or death.

While not speaking directly to the most recent murder, Jang said too many times during such investigations police have seen instances where suspects in one gang hit are the victims in another.

"It really speaks to this tit for tat, back and forth, 'you shoot me I shoot you' mentality with these reckless young men."

Burnaby Mayor Mike Hurley acknowledged that the brazen nature of the shootings has left many people feeling on edge.

"What is happening in our region, right now, is completely unacceptable. We will not tolerate this," he said. "This cycle of violence must end."

This report by The Canadian Press was first published May 14, 2021.