Canadians still confident in vaccines and oilsands outbreak : In The News for May 11

In The News is a roundup of stories from The Canadian Press designed to kickstart your day. Here is what's on the radar of our editors for the morning of May 11 ... What we are watching in Canada ...
May 11, 2021 1:15 AM By: Canadian Press 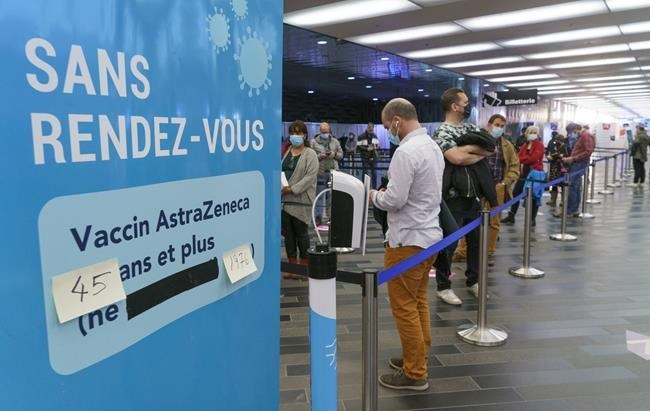 In The News is a roundup of stories from The Canadian Press designed to kickstart your day. Here is what's on the radar of our editors for the morning of May 11 ...

What we are watching in Canada ...

A new Leger poll suggests Canadian confidence in COVID-19 vaccines is holding firm despite swirling confusion and concern about the safety of the Oxford-AstraZeneca vaccine.

More than eight in 10 poll respondents said they are either vaccinated already or plan to get inoculated when it's their turn, almost identical to the number who said that in a similar poll taken a month ago.

However fewer than half of of those surveyed say they have trust in either AstraZeneca or the vaccine from Johnson & Johnson, compared with more than eight in 10 for both Pfizer-BioNTech and Moderna.

AstraZeneca and J&J are potentially linked to an extremely rare, but potentially fatal, blood clotting syndrome.

However there is far more support for the use of passports for domestic or international travel and a lot less for the idea of using them for activities like going to a restaurant, working out at the gym or taking in a concert.

Leger surveyed 1,529 people online for the poll between May 7 and May 9.

It cannot be assigned a margin of error because internet-based polls are not considered random samples.

Oilsands companies are stepping up protective measures as COVID-19 sweeps through camps and worksites in the region.

The outbreaks come at the same time that thousands of workers are being brought in for spring maintenance shutdowns at various plants.

As of last week, Alberta had reported more than 3,700 active cases in the North Zone that includes Fort McMurray.

"Our focus continues to be on the health and safety of our workforce and communities and are maintaining our strict site protocols to prevent the risk of spread of COVID-19 as we continue to operate," says Imperial spokeswoman Lisa Schmidt in an email.

The company started a voluntary vaccination clinic at the site on Monday morning and has implemented a rapid testing program to screen workers before they travel to Kearl, which is just beginning a scheduled maintenance "turnaround," she adds.

Alberta leads Canada in COVID-19 cases and has a seven-day new infection rate twice that of the next highest province, Ontario.

U.S. regulators on Monday expanded the use of Pfizer's COVID-19 vaccine to children as young as 12, offering a way to protect the nation's adolescents before they head back to school in the fall andpaving the way for them to return to more normal activities.

Shots could begin as soon as Thursday, after a federal vaccine advisory committee issues recommendations for using the two-dose vaccine in 12- to 15-year-olds. An announcement is expected Wednesday.

Most COVID-19 vaccines worldwide have been authorized for adults. Pfizer's vaccine is being used in multiple countries for teens as young as 16, and Health Canada became the first to expand use to 12 and up as of May 5. Parents, school administrators and public health officials elsewhere have eagerly awaited approval for the shot to be made available to more kids.

The Food and Drug Administration declared that the Pfizer vaccine is safe and offers strong protection for younger teens based on testing of more than 2,000 U.S. volunteers ages 12 to 15. The agency noted there were no cases of COVID-19 among fully vaccinated adolescents compared with 16 among kids given dummy shots. More intriguing, researchers found the kids developed higher levels of virus-fighting antibodies than earlier studies measured in young adults.

The younger teens received the same vaccine dosage as adults and had the same side effects, mostly sore arms and flu-like fever, chills or aches that signal a revved-up immune system, especially after the second dose.

What we are watching in the rest of the world ...

Palestinian militants launched dozens of rockets from Gaza and Israel unleashed new air strikes against them early Tuesday, in an escalation triggered by soaring tensions in Jerusalem and days of clashes at an iconic mosque in the holy city.

Twenty-two people, including nine children, were killed in Gaza overnight, most of them in Israeli strikes. More than 700 Palestinians were hurt in clashes with Israeli security forces in Jerusalem and across the West Bank in 24 hours, including nearly 500 who were treated at hospitals. The Israeli military said six Israeli civilians were hurt by rocket fire Tuesday morning.

This round of violence, like previous ones, was fueled by conflicting claims over Jerusalem, home to major holy sites of Islam, Judaism and Christianity. The rival national and religious narratives of Israelis and Palestinians are rooted in the city, making it the emotional core of their long conflict.

In recent weeks, tension as been soaring in Jerusalem, marked by clashes between Palestinian protesters and Israeli police in the walled Old City, located in east Jerusalem which Israel captured and annexed in the 1967 war.

The Metis under Louis Riel were defeated by the militia at Batoche, Sask., during the North-West Rebellion. Riel surrendered a few days later and was charged with treason and convicted. He was executed in Regina on Nov. 16th.

Canada's justice and heritage ministers will be recalled to justify a change to the Broadcasting Act that critics warn could erode the rights of individual users who upload content to social media.

The Heritage committee on Monday called for Justice Minister David Lametti and Heritage Minister Steven Guilbeault to address new questions about Bill C-10 at its next meeting on Friday or as soon as possible afterward.

Work of the 11-member committee has been stalled since Liberal MPs on the committee moved to cut a section of the legislation that expressly excluded user-generated content, such as a photo or statement posted to social media, from regulation.

That move quickly stirred angry protests and media commentary, with critics arguing that the change may infringe on the Charter of Rights and Freedoms.

Guilbeault has said the protests against the bill are unwarranted and threaten to delay Bill C-10's update to the Broadcasting Act. He says the intent of the bill is to give the CRTC power to regulate some activities of large social media platforms when they behave like broadcasters.

Guilbeault's parliamentary secretary,  MP Julie Dabrusin says that Bill C-10 has strong support from Canadian cultural industries that want big platforms to pay a share of their revenue to fund programming, as conventional broadcasters do.

Ottawa police say a Quebec woman has been charged in the alleged abduction of an eight-day-old baby.

Police say it took place Sunday afternoon, when the woman allegedly broke into a west-end home, used bear spray on the occupants and took off with the child.

They say a neighbour was able to detain them nearby until police arrived. Police say the newborn wasn't hurt.

Investigators say the accused, a 32-year-old woman, had previously been in contact with the child's mother on social media through a group for new mothers, and had even brought a gift to the home last Friday.

They believe she may have been in touch with other new mothers through such groups.

The suspect is charged with abduction of a person under 14, administering a noxious substance, break and enter, and other offences.

This report by The Canadian Press was first published May 11, 2021