OTTAWA — At least three provinces are now temporarily delaying or pausing COVID-19 vaccination programs amid fallout from Pfizer's decision to reduce Canada's vaccine deliveries over the next month.
Jan 18, 2021 1:55 PM By: Canadian Press 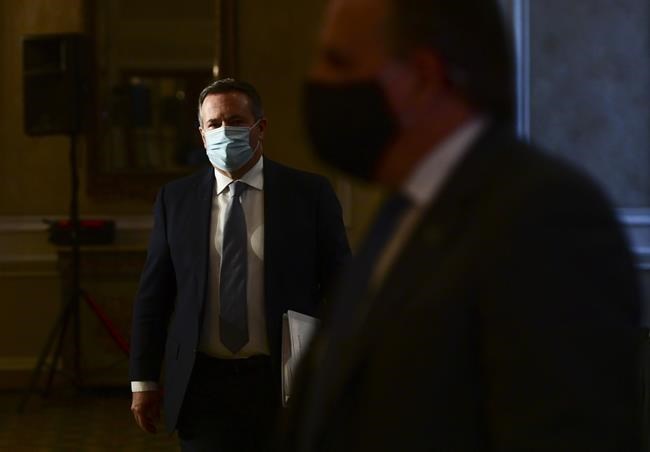 OTTAWA — At least three provinces are now temporarily delaying or pausing COVID-19 vaccination programs amid fallout from Pfizer's decision to reduce Canada's vaccine deliveries over the next month.

More than half a million Canadians have been vaccinated against COVID-19 thus far, and more than 822,000 doses of the two approved vaccines have been delivered from Pfizer-BioNTech and Moderna.

But all provinces are being forced to revisit their vaccination programs after Pfizer suddenly told Canada on Friday morning it would be cutting the doses delivered in half over the next four weeks, while it upgrades its factory in Belgium. Pfizer was to ship 735,150 doses to Canada between Jan. 18 and Feb. 14.

Canada's deliveries after the partial pause will be bigger than previously expected so Pfizer can fulfil its contract to deliver four million doses by the end of March.

About 600,000 doses have been delivered from Pfizer so far.

The new delivery schedule has not yet been posted publicly, but provinces are preparing for the temporary downturn anyway.

Ontario's chief medical officer Dr. David Williams said Saturday his province would delay giving the second dose of the Pfizer vaccine to 42 days, instead of the recommended 21 days. The 28-day schedule for Moderna's vaccine will remain intact, said Williams.

Alberta Premier Jason Kenney said Monday his province has "quite simply run out of supply" of COVID-19 vaccines and is no longer taking appointments for people to get their first doses.

"I am deeply disappointed at the situation we are now facing," said Kenney.

"Due to the unexpected supply disruption the federal government announced last week, Alberta will have no more vaccine doses available to administer as first doses by the end of today or early tomorrow."

B.C. Health Minister Adrian Dix said his province is considering whether to adjust the dosing schedule. B.C. had already changed the 21-day second-dose schedule to 35 days, but Dix said that may change again because of the delivery shortages.

Alberta hit a milestone on Sunday by delivering of the first doses of vaccine to all residents of long-term care facilities. Ontario still anticipates hitting its first target of inoculating 61,500 long-term care residents, staff and primary caregivers by Thursday.

Pfizer is trying to double its production of vaccine doses to two billion this year and is planning to temporarily curb production at its Belgian facility to make upgrades that will allow for that increase.

Pfizer Canada spokeswoman Christina Antoniou said the delivery delays will affect other countries besides Canada and the European Union but the company has not identified them.

"Multiple countries around the world, beyond Canada and the EU, will be impacted in the short term," Antoniou said.

"Pfizer is working closely with all governments on allocation of doses. While the precise percentage allocation may fluctuate, we anticipate that it will balance out by the end of (the first quarter of) 2021."

Europe has already seen its delivery delay period shortened from four weeks to just one. Pfizer told Europe Friday that delays to its dose deliveries would end Jan. 25, while Canada expects to be affected until mid-February.

Pfizer later announced Europe's deliveries would only be affected for this week.

"It’s up to the prime minister to explain to Canadians why they won’t be able to get vaccinated for months, while European countries have minimal delays in receiving vaccines," Rempel said.

"It’s up to him to explain why, based on Friday’s news about vaccine delivery delays, we might be looking at many more months of lockdown — with the lost jobs, time with families, and mental health challenges that accompany them. It’s up to him to find a better path forward."

Trudeau said Friday the decision was "out of our hands" but that it would not affect Canada's long-term goal to have every Canadian vaccinated by the end of September.

By the fall, Canada is to get a total 40 million doses of the Pfizer-BioNTech and Moderna vaccines. Both use a similar technology to train the human immune system to recognize the SARS-CoV-2 virus that causes COVID-19, and mount a defence against it.

Both vaccines showed they were more than 94 per cent effective at preventing serious illness after two doses.

Health Canada approved Pfizer's vaccine Dec. 9 and Moderna's on Dec. 23. It continue to review two more COVID-19 vaccines, from AstraZeneca and Johnson &amp; Johnson, but neither is expected to complete the review process in Canada for at least several more weeks.

This report by The Canadian Press was first published Jan. 18, 2021.