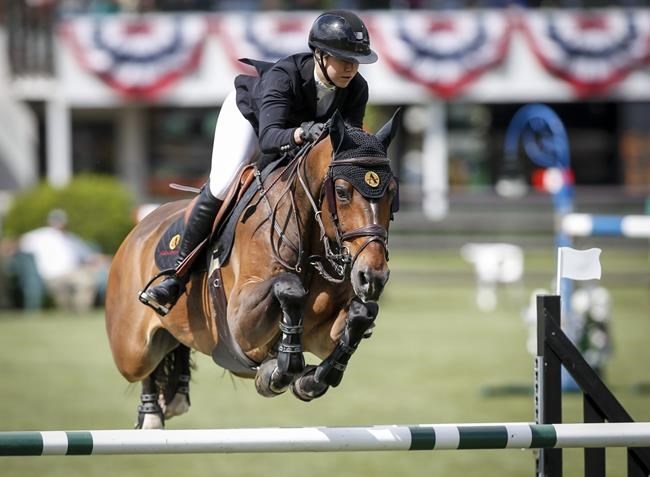 The Court of Arbitration for Sport in Lausanne, Switzerland, published its reasoning Tuesday behind an earlier decision to deny an appeal by Walker and Equestrian Canada.

Walker of Aurora, Ont., was stripped of her results in the 2019 Pan American Games in Lima, Peru, after testing positive for benzoylecgonine on the day of the team final.

Canada tumbled from fourth to seventh in the team event, and out of the last qualifying berth for Tokyo.

Canada can send just one horse and rider for the individual competition to the Olympics.

CAS accepted Walker's contention that the tea bag she took from the hotel breakfast service the morning of the team final contained the cocaine metabolite.

While coca and coca leaves are illegal in Canada under the Controlled Drugs and Substances Act, coca tea is legal and consumed in several South American countries.

Coca tea is considered an altitude sickness remedy in Peru.

"I am very pleased that CAS accepted what I said as factually and scientifically correct," Walker said Tuesday in a statement. "I take my health, competitions, and duty as a team athlete very seriously.

"While I appreciate the personal vindication, that is not as important to me as the team being able to compete."

While the CAS panel said in its decision it was satisfied that Walker's violation "was not caused by the deliberate ingestion of cocaine" the body also determined she and other competitors were contractually bound by Pan Am Sports anti-doping rules, and CAS did not have grounds to overrule them.

"It's very unfair that my teammates are barred from competing at the Olympic Games when the truth has been accepted," Walker said. "Team Canada competed fairly and has earned the right to be in Tokyo."

A possible Canadian medal in team show jumping in Tokyo is no longer there for the country's top riders.

Equestrian Canada and Walker's lawyer indicated they may not give up the fight, however.

"Canada won fair and square. It is wrong that Canada is out of the Olympics and is replaced by Argentina," lawyer Tim Danson said in a statement.

"There is an appeal route to the Swiss Federal Tribunal in Lausanne. The grounds to appeal are very narrow. We are looking at this very seriously.”

"EC has stood by Nicole throughout the discipline and appeals process and together, we will explore the option of appealing the CAS decision to the Swiss Federal Tribunal in Lausanne," the organization said in a statement.

Lamaze, Foster, Millar and Yann Candele lost a jump-off for the bronze medal at the 2016 Olympic Games in Rio.

Walker is the daughter of Belinda Stronach, president and chairman of The Stronach Group and former member of Parliament from 2004 to 2008.

Walker told CAS she ran out of the green tea bags she had brought from Canada to Lima.

This report by The Canadian Press was first published May 4, 2021.