CALGARY — Canada's top players in women's hockey will finally get to play real games later this month in Calgary.
May 6, 2021 2:15 PM By: Canadian Press 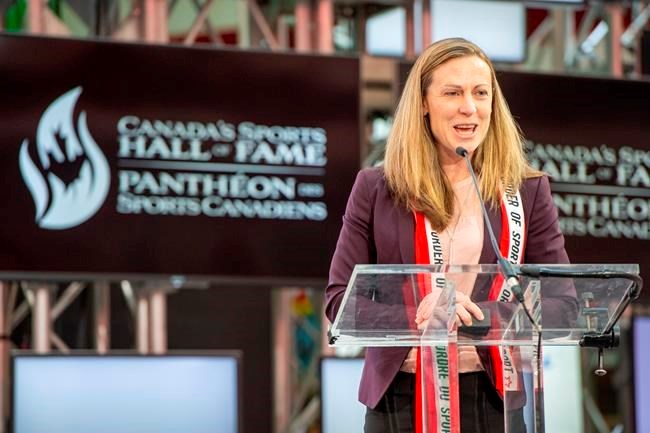 CALGARY — Canada's top players in women's hockey will finally get to play real games later this month in Calgary.

The Professional Women's Hockey Players' Association (PWHPA) is holding Canada's first Dream Gap Tour event in over a year May 24-30 at a Calgary venue yet to be announced.

Sixty players from the PWHPA's three Canadian hubs in Toronto, Montreal and Calgary will play to determine the Canadian Secret Cup champion.

Secret, which announced a $1-million sponsorship of the PWHPA earlier this year, and the NHL's Calgary Flames are the financial partners in the event.

All games will be broadcast on Sportsnet and its streaming platform.

Similar COVID-19 quarantine and testing protocols established by Hockey Canada for the world junior men's hockey championship and national women's and para hockey camps in Alberta will be incorporated.

"They believe the protocols, the quote-unquote bubble that's been put in place, will secure the safety of our group and Albertans," the Hockey Hall of Famer told The Canadian Press. "There will be no interaction with the public."

While the PWHPA's Calgary plans were in the works before Nova Scotia's premier pulled the plug on this month's women's world championship, the Dream Gap Tour now offers an oasis in what's been a pandemic hockey desert for the majority of players in the national women's team pool.

The PWHPA's American chapter has played a handful of games in the United States in recent weeks, although a two-day tournament in St. Louis was postponed from early April to May 16-17.

Canada's mandatory 14-day quarantine upon return from outside the country kept Canadian players from participating in the U.S. games.

Stricter health regulations across Canada also made skating together in groups impossible at times and planning actual games in the country a non-starter.

"It's been so challenging," Hefford said. "We had to try to encourage our players to be patient early on in the season, and even in early 2021 we continued to reiterate we would only host events if we could feel really comfortable about the safety of everyone involved."

The PWHPA, which includes Canadian and U.S. national team players, rose from the ashes of the Canadian Women's Hockey League that folded in 2019.

The goal of the roughly 150 players is a sustainable league that offers the competitive supports and training environments the male pros get, and wages that allow them to be professional athletes.

They've so far refused to join the six-team National Women's Hockey League, which recently announced a doubling of each team's salary cap to US$300,000 for next season. The Toronto Six is the lone Canadian club in that league.

The PWHPA held a series of Dream Gap Tour tournaments and events across North America in 2019-20 before the global pandemic brought the sporting world to its knees.

The pandemic continued to impede women's hockey internationally and domestically.

The women's world championship in Nova Scotia was cancelled a second straight year, although Hockey Canada is committed to hosting the tournament in August in a location yet to be named.

January's world under-18 women's championship in Sweden was called off, while a men's under-20 champion was crowned in Edmonton that month.

The NHL's Flames have been supportive of women's hockey throughout the pandemic, Hefford said.

"To be able to take the next step and have this showcase, or have a league, is critical," Flames head coach Darryl Sutter said Thursday. "At the grassroots, there's a lot of girls playing hockey.

"I think its just a matter of time where you have more girls involved in the NHL part of it too, in terms of coaching and training and all that."

Calgary's Scotiabank, Toronto's Sonnet and Montreal's Bauer squaring off for a trophy and prize money can help revive the visibility of women's hockey in Canada, Hefford said.

"We represent the players and we want to see them out there," she stated.

"We have partners that have been so loyal and committed, so helpful in this process to move this forward, get the women back on the ice.

"It seems like men's hockey has gone on and we continue to hit these hurdles.

"I hope this is a great opportunity for the women to play, but also for people to see the best of women's hockey on the ice again."

This report by The Canadian Press was first published May 6, 2021.