Toronto FC is looking for a new designated player, opting not to pick up the option on Pablo Piatti.
Nov 30, 2020 3:11 PM By: Canadian Press 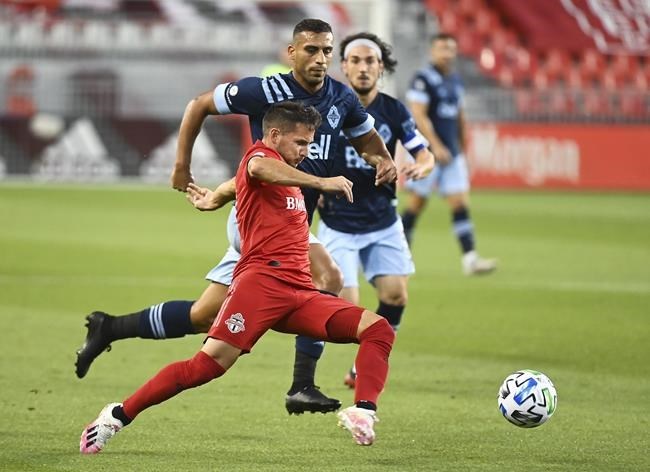 Toronto FC is looking for a new designated player, opting not to pick up the option on Pablo Piatti.

GM Ali Curtis said while TFC will talk to the 31-year-old Argentine midfielder and his representative about returning next season, it is not interested in having him back as a DP. Piatti joined Toronto in February from Spain's Espanyol on a one-year contract plus an option.

Piatti, who will be eligible for the MLS re-entry draft, had four goals and four assists in 17 league games. When healthy and at his best, he made a difference — but apparently not big enough.

“The year did not end how we wanted it to, but I am very proud of what the team accomplished under unique and difficult circumstances," Curtis said in a statement detailing Toronto's end-of-season moves.

"We’ll be able to return a core part of the group, including some young, exciting and hungry homegrown players, but also, we’ll look to make some important decisions that add to the quality of the team. In a lot of ways, the (salary) cap next year will be less than it was this year, so we’ll have to be creative."

Toronto's other designated players are Spanish playmaker Alejandro Pozuelo and striker Jozy Altidore. Only a portion of their salaries count against Toronto's cap.

When available, Piatti forged an effective partnership with Pozuelo on the right side of the Toronto attack. The two also became close off the field.

"I hope he can stay here because he does a lot for the team, … … A big professional," Pozuelo said in his end-of-season meeting with the media last week.

Piatti, who suffered right knee ligament damage in February 2019, missed the opening two games of the season before the league shut down due to the pandemic and did not see action until the MLS is Back Tournament in July. Toronto medical staff were careful not to rush Piatti, who had played just seven games since his knee surgery.

The five-foot-four 139-pounder missed the last four games of the regular season with a hamstring injury, during which time TFC went 1-3-0 and missed out on the Supporters' Shield. He returned for Toronto's season-ending 1-0 loss to Nashville SC in the first round of the playoffs.

Piatti opened his MLS account in mid-August with two goals, including a 25-foot long-range rocket, in a 3-0 win over the Vancouver Whitecaps in his BMO Field debut.

The 35-year-old Ciman saw action in 12 games this season, including five starts. The 28-year-old Zavaleta was restricted to five games (three starts).

The 33-year-old Morrow, who has played more than 200 games in Toronto colours, was limited to 15 games (11 starts) and missed much of the regular-season stretch drive through injury. Off the field, he is the executive director of Black Players for Change.

Curtis said the club will talk to Morrow and its other free agents about returning.

This report by The Canadian Press was first published Nov. 30, 2020