More than half of British Columbians say they have recently witnessed a driver talking on a hand-held cellphone or texting while driving
Dec 24, 2020 6:00 AM By: Mario Canseco 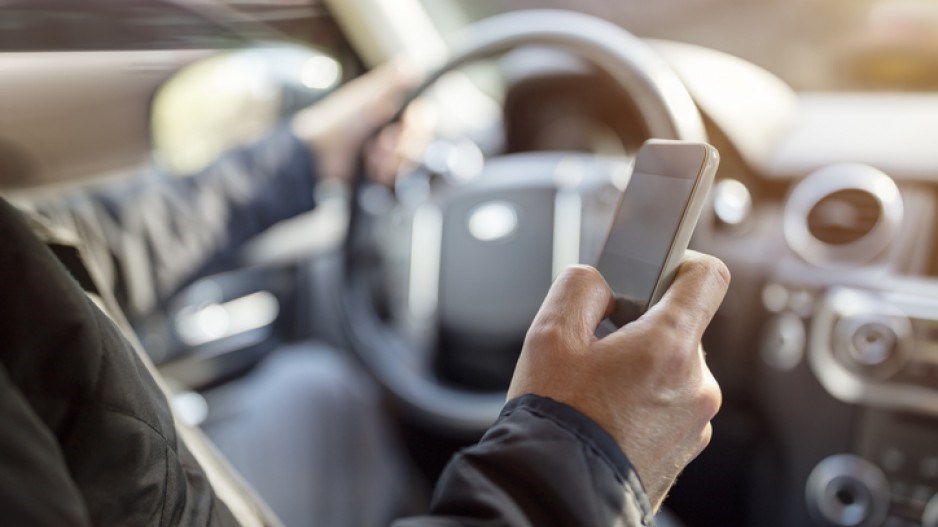 Motion pictures and television shows from the late 1990s feature many images of people driving while using a cellphone – and not just in emergencies.

As cellphones got smaller and more manageable than the “bricks” of the 1980s, the opportunity to experience a conversation with a person who was not inside the vehicle was exploited by many users.

In the early years of this century, specific jurisdictions began to notice how access to a hand-held cellphone became a hindrance to all road users. Slowly, Canadian provinces began to limit the way in which these devices could be used, in an effort to reduce the number of accidents caused by multitaskers.

The rules have worked, to an extent. The B.C. government estimates that distracted driving accounts for just over one in four crash fatalities. There are many forms of distracted driving, including smoking or vaping, playing music inside the car too loudly, reading and eating.

Research Co. and Glacier Media wanted to ask British Columbians specifically about drivers who talk on a handheld cellphone or text while driving. The results show that, in spite of the threat of fines and several public awareness campaigns, some drivers are not getting the message.

Across the province, more than half of British Columbians (55%) say they have witnessed a driver talking on a hand-held cellphone or texting while driving over the past month. Men (62%) are significantly more likely to remember these episodes than women (47%).

While half of Metro Vancouverites (49%) recall someone using a hand-held cellphone illegally behind the wheel, the proportion is significantly higher across all other regions of the province: 61% in both northern B.C. and the Fraser Valley, and 64% in both southern B.C. and Vancouver Island.

Drivers caught emailing, texting or using an electronic device while driving in British Columbia face a fine of $368 and four penalty points (equivalent to $252) in their insurance penalty point premium. This means a total of $620 for a first-time infraction.

A majority of British Columbians (52%) believe the current fine is “about right.” Three in 10 (30%) consider the fine “too low,” while 14% deem it “too high.” There is a definite generational divide on this matter. While only 18% of British Columbians aged 18 to 34 believe the fine for distracted driving is “too low,” their older counterparts trend toward a heftier punishment: 29% among those aged 35 to 54 and 38% among those aged 55 and over.

There is also a fascinating political breakdown. While majorities of those who voted for the BC New Democratic Party (NDP) (53%) and the BC Liberals (58%) in this year’s provincial election believe the fine for distracted driving is “about right,” only 32% of BC Green voters concur. In fact, 53% of those who cast ballots for BC Green candidates in 2020 think the current fine is “too low.”

Many ideas have been floated around to deal with the problem of distracted driving, and some of the province’s residents suggest that the current state of affairs is too lenient. The appetite for significantly harsher measures is evident when three different scenarios were provided to respondents.

The notion of removing the hardware from those who abuse it is extremely popular. Seven in 10 British Columbians (70%) would consent to seizing the electronic devices of repeat offenders who use their hand-held devices while driving, while 24% would not.

Practically three in five British Columbians (59%) are in favour of doubling the current first-time fine for distracted driving to $1,240, while 32% are opposed to this course of action. This measure is particularly popular among men (62%), residents aged 35 to 54 (66%) and those in northern B.C. (75%).

Finally, just over half of respondents (54%) would consent to suspending a driver caught emailing, texting, or using an electronic device in British Columbia for one year, while 37% disagree with this punishment. Men (59%) and residents of Vancouver Island (62%) are particularly supportive of this proposal.

In spite of the laudable efforts of police officers to crack down on distracted driving, universal enforcement is impossible. Some drivers continue to partake on this illegal practice, hoping that they will not get caught and assuming a superiority over others when it comes to their ability to multitask inside a vehicle in contravention of existing legislation.

British Columbians are not thrilled with the status quo, with more than half saying they witnessed a driver using a hand-held cellphone over the past four weeks. The existing guidelines are seen as sufficient by a majority, but there is significant support for more severe penalties in the form of suspensions, higher fines or the seizure of electronic devices from those who clearly have not learned when or how to use them.