Column: COVID-19 ruined my vacation but not - thankfully - my husband’s hip surgery

A bicycle accident ended our ‘staycation’ and landed my husband in Royal Columbian Hospital for five days. Here’s what happened.
Jun 13, 2020 7:30 AM By: Diane Strandberg 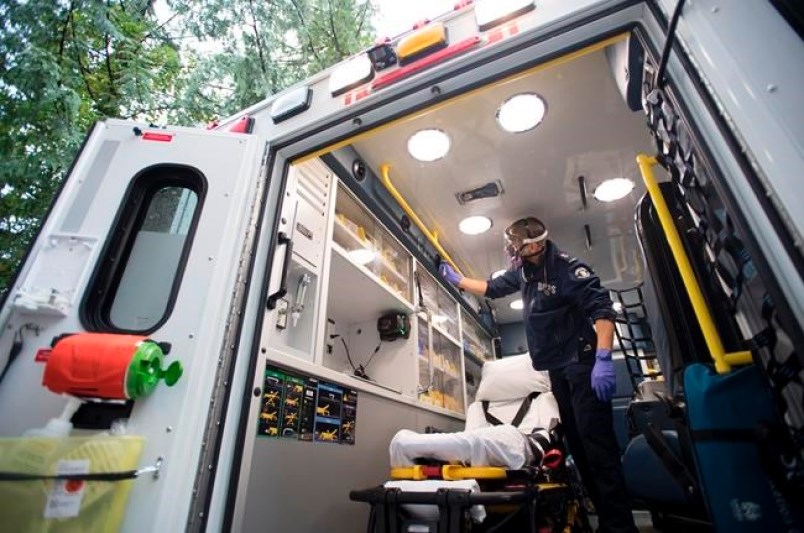 B.C. Ambulance paramedic Jeff Booton cleans his ambulance at station 233 in Lions Bay, B.C. Wednesday, April 22, 2020. Booton was among the people who cared for a COVID-19 patient. The doctors and nurses who care for the critically ill already understand death is a reality. But COVID-19 has added an emotional burden to their work. For my husband, going to hospital in an ambulance was the last thing he wanted to do during the COVID-19 pandemic.THE CANADIAN PRESS/Jonathan Hayward

“Where are you calling from?”

The authoritative voice on the end of the phone added a strange intensity to what otherwise must have been a routine call for 911 operators who field hundreds of calls daily from worried B.C. residents needing emergency transportation.

My husband, looking as grey as last week’s laundry, had agreed to be taken to Royal Columbian Hospital via ambulance.

Not wanting to make a fuss, dreading the emergency wait and worried about contracting COVID-19, my husband had put off a hospital visit for about 18 hours after a fall off his bike left him incapacitated and in pain.

But COVID-19 or no, he had to go because Dr. Google wasn’t going to fix him — that much I knew — although it took a little convincing.

What transpired over the next five days was a unique opportunity to see how health care was being provided during a pandemic.

Sure, our 25th anniversary trip to Hawaii was cancelled last month because of coronavirus, and our staycation at home was now ruined.

However, it turned out, a spell at RCH wasn’t too much different from other visits to the hospital over the years.

Masks? We’re used to them now and when paramedics showed up wearing breathing devices you’d see astronauts wearing on some outer planet, we weren’t surprised.

Hospital food? It was nothing special but it showed up regularly.

Roommates? They were a diversion from staring at the ceiling for my husband, who said one man was recovering from nine stab wounds he received during a drug-related home invasion, while another young woman, who’d been grazed by a train in Squamish and was choppered in to RCH, F-bombed her way through her care.

Well, what else would you expect from a major trauma hospital?

What is important was the care and treatment. It was professional, although there were waits for everything from getting a bed in a ward to X-rays, blood tests, expert opinion, physiotherapy and help to the bathroom, he said.

But, he acknowledged that hospitals have a lot going on. For one thing, they are busy clearing up a backlog of 30,000 elective surgeries that were put on hold to free up beds for COVID-19 patients.

We were both just relieved that a Fraser Health orthopaedic surgeon along with an army of nurses, anesthesiologists, and other health care professionals, were able to drop everything to squeeze in a one hour hip replacement surgery to repair a devastating fracture.

Still, there were challenges, and communication was one of them. Typically, I would have been at my husband’s bedside, advocating for him and tracking down doctors and nurses for the latest update on his treatment and care.

Instead, there was mostly silence and because I couldn’t visit; our communication was mostly via cell phone texts and the odd phone call.

Were healthcare providers delinquent in that regard? I would say no, it’s just that I’m a worrier.

When the surgeon did call to say the surgery was a success, I was grateful.

Sure, I would have liked to know when it was going to happen. But that’s OK, I’m sure health care providers got more done without me being there.

These days we all have to cut each other some slack, and as for my hubby, he’s recovering nicely.