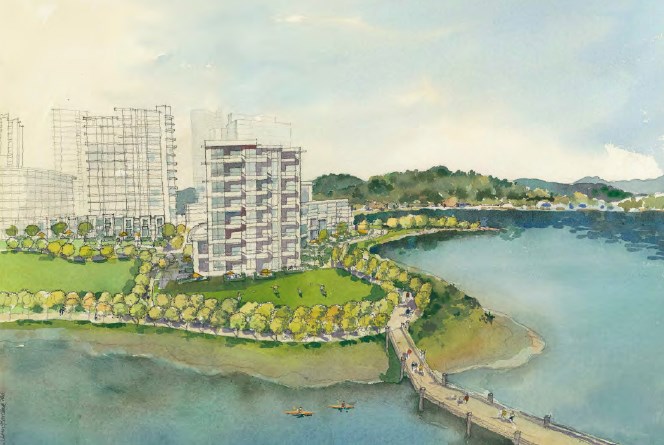 Waterfront development at Flavelle, an artist's rendering.City of Port Moody

A lot of tides will splash up at Rocky Point Park before the owners of the historic Flavelle sawmill site can realize their dream of building a waterfront community that could potentially boost the city's population by 20%.

The scope of the project is stunning: 7,000 people and 3,397 residential units in apartments ranging from mid-rise to 38 storeys. The remaining 4% of housing would be in 75 live/work units and 62 units in a low-rise rental building.
It would take 20 to 25 years for a full build-out and there are a lot of considerations before plans can go ahead.

As for jobs, the proponents say the project would create 1,000 jobs (many likely part-time), replacing the current 68 jobs that would relocate to a company mill in Surrey. Traffic would also be a problem, an overpass to Mary Street in Moody Centre is proposed but TransLink has been clear that there are no plans to build a western PoMo SkyTrain station for at least 30 years.

Yes, big plans and plenty for city council to consider.