Editorial: Homeless protestors have a point

More services, housing are needed for the Tri-Cities, but protestors should work with groups to get more done
Jun 18, 2019 2:56 PM By: Tri-City News 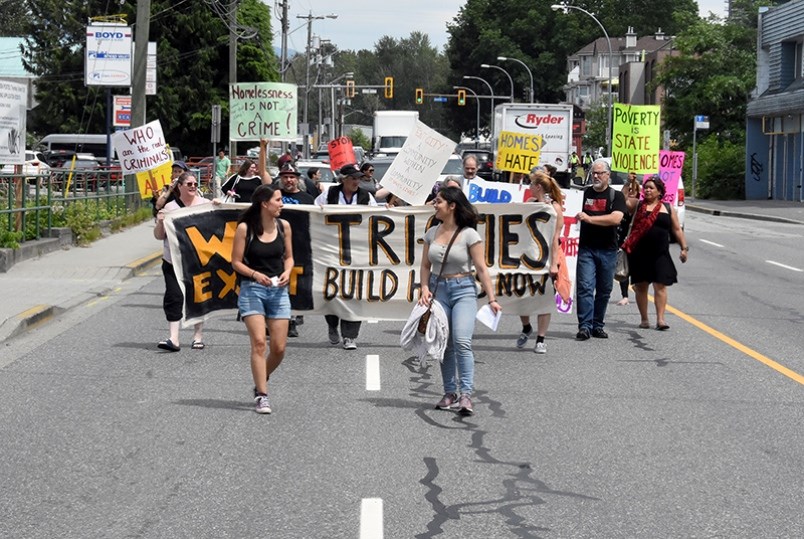 Tri-Cities homeless marched in Port Coquitlam and Coquitlam last week calling for more services and an end to what some consider to be harassment by police and bylaw officers. We say they should work with groups to get what they need rather than oppose them.

Their tactics may be controversial but protesters who rallied in Port Coquitlam and Coquitlam last week in support of local homeless people are raising issues that need to be addressed.

Every person counts and while the Tri-Cities may have a relatively small number of homeless people — compared to other cities, such as Surrey, Langley and Vancouver, which have two to 10 times the number of people without homes, according to the 2017 count — it’s still important to meet their complex needs.

Some may argue that ensuring that people living rough have shelter, food and access to medical care is throwing good money after bad only have to look across the Pitt River for an example of how bad things can get when social issues are ignored. There, in Maple Ridge, the community has been in an uproar over the Anita Place camp and plans to build 51 units of modular housing, with supports.

Here, an orderly process of issue identification, support and, ultimately, construction led to the establishment of a shelter and transitional housing at 3030 Gordon Ave., where 30 individual rooms are available, and are filled nightly, as well as 30 units for longer stays.

The operation of this shelter has not been without controversy, and in recent months, Coquitlam and Port Coquitlam have been taking a closer look at community impacts, such as discarded needles, loitering, social disturbances and other issues, particularly affecting nearby businesses.

But for the most part, the task force found that the shelter reduced community harms more than exacerbating them.

But 3030 Gordon might not be enough. This past winter, it turned away 30 people and it appears there are more homeless people than there are homes in the Tri-Cities, creating a number of problems which protesters identified last week.

For example, people, understandably don’t like their belongings taken and are occasionally startled by bears. The community, meanwhile, is concerned about safety and the proliferation of camps, needles and campfires.

Providing more housing would help and modular units appear to be an affordable option, with Riverview an ideal location for construction because services are already available. Transportation remains an issue that would need to be resolved.

Other gaps in services include too few hot meals, inadequate mental health and addictions services, and the lack of a warming room for people in the cold and wet weather.

This seems like a long list of fixes. The good news is that if the complex needs of the region’s homeless are properly dealt with, some outstanding community issues may be resolved, as well.

But bringing these services takes more than money — it takes community support and the local protesters would be advised to work with established groups such as the Tri-Cities Homelessness and Housing Task Group and Hope for Freedom Society, as well as city councils, to build community acceptance for the programs and housing they so badly need.