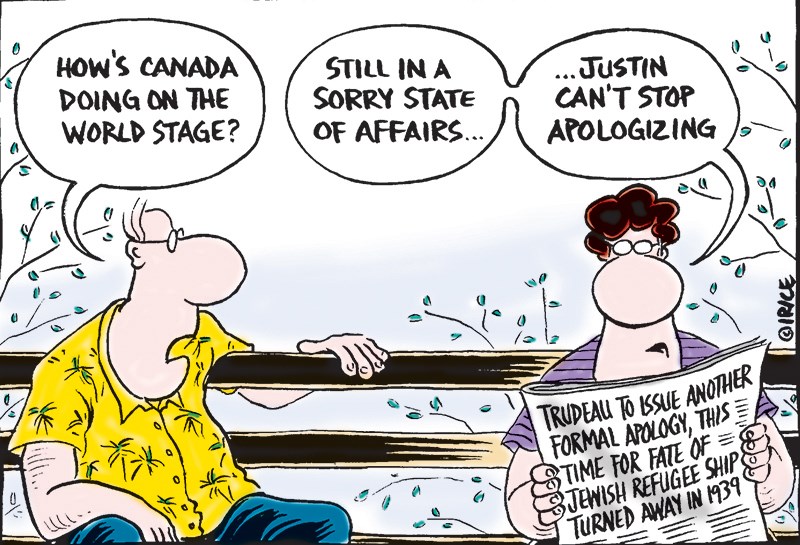 A cartoon by Ingrid Rice that appeared in the May 16 edition of The Tri-City News.INGRID RICE

Re. Ingrid Rice editorial cartoon (Opinion, The Tri-City News, May 16).

I enjoy editorial cartoons and Ingrid Rice is usually quite the highlight, but her cartoon mocking Justin Trudeau’s yet-another-apology-this-time for the ship of Jewish refugees turned away in 1939 misses the mark.  Many of the Jews on that ship ended up back in Germany where they met their fate in concentration camps.

That ship speaks harshly to Canadian antipathy towards Jews at the time.

The 1983 book, None is Too Many (which helped move the Joe Clark government to act on the Vietnamese boat people) is an account of appalling Canadian racism and anti-Semitism in the years between 1933 and 1945, when Adolf Hitler was in power in Germany and Prime Minister William Lyon Mackenzie King in Canada.

With a population of about 11 million, Canada found space for less than 5,000 Jews (when the Americans received 200,000), all while the Nazi’s exterminated six million Jews, one third of whom were children.

It was not as if the Canadian government lacked warning signs from Germany.

Kristallnacht, or “night of broken glass” on Nov. 10, 1938, in the words of noted historian Martin Gilbert was the most dramatic “prelude to destruction.” Over 1,000 synagogues were burned to the ground, countless Jewish shops and homes looted, followed by thousands of men going to concentration camps.

But the Canadian government did nothing.

Not reflecting on our terrible past when the world is currently beset by a number of different refugee crises is not an option. An apology is in order.

Opinion: Breaking down the 'pseudo-legal arguments' a Vancouver restaurant is trying to use to avoid legal sanctions
Apr 6, 2021 8:00 AM
Comments