Coquitlam Fire and Rescue was among several departments which responded to the fire which began Sunday
Sep 16, 2020 12:48 PM By: Tri-City News 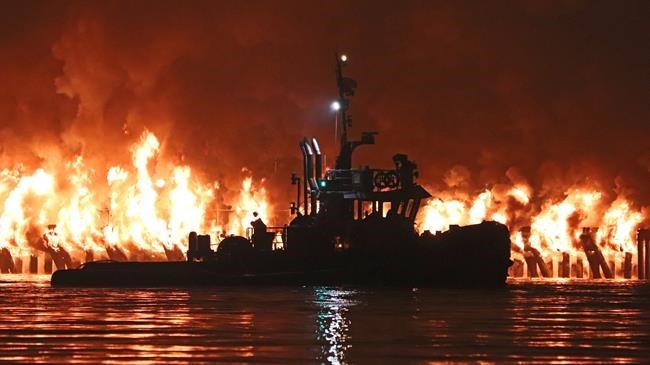 A boat is seen at a fire at Pier Park along the Fraser River in New Westminster, B.C. on Sunday, September 13, 2020. THE CANADIAN PRESS/Shane MacKichan

The massive fire on the New Westminster waterfront once again highlights the vulnerabilities of communities reliant on stand-alone small fire services.

Every firefighter on duty with every piece of equipment was deployed to this massive fire, assisted by multiple other community-based fire services. …

If you suffered a cardiac arrest, a narcotic overdose and stopped breathing, were trapped in a vehicle involved in a crash or a second fire erupted elsewhere in the city, you - a resident of this community - would wait while another community fire service responded from another city, wait for off-duty personnel to be called in or — as in the case of a cardiac arrest or overdose — wait for another emergency service to attend.

Fire chiefs and fire unions are quick to criticize other emergency services, however they remain silent when it’s their service that jeopardizes the public safety.

A regional service would eliminate the massive duplication that exists in the fire services now, save taxpayers tens of millions of dollars, enhance services, eliminate delays by backfilling vacant fire halls and provide adequate staff and equipment for massive fires without the delay of requesting mutual aid.

Local mayors and councillors are bullied into maintaining the status quo by the fire (departments), with timely media messages of gloom and doom if any change is contemplated. The inflammatory messages from the fire unions are a tactic to bully the public and elected officials.

When election time comes around, the fire services unions either endorse a candidate or denigrate (a) candidate, highlighting how they will harm communities with any change. Taxpayers deserve an uninterrupted service during large incidents.

There is an obvious choice: we change and develop a world-class fire service able to meet the demands of a growing vibrant metropolis or we maintain the status quo, putting your community at risk.