Letter: Remembrance for War Amps and the many who served

I would like to pay special tribute to all men and women who have served in Canada’s military, and especially those who lost a limb or limbs in war.
Nov 15, 2016 2:10 PM By: Tri-City News 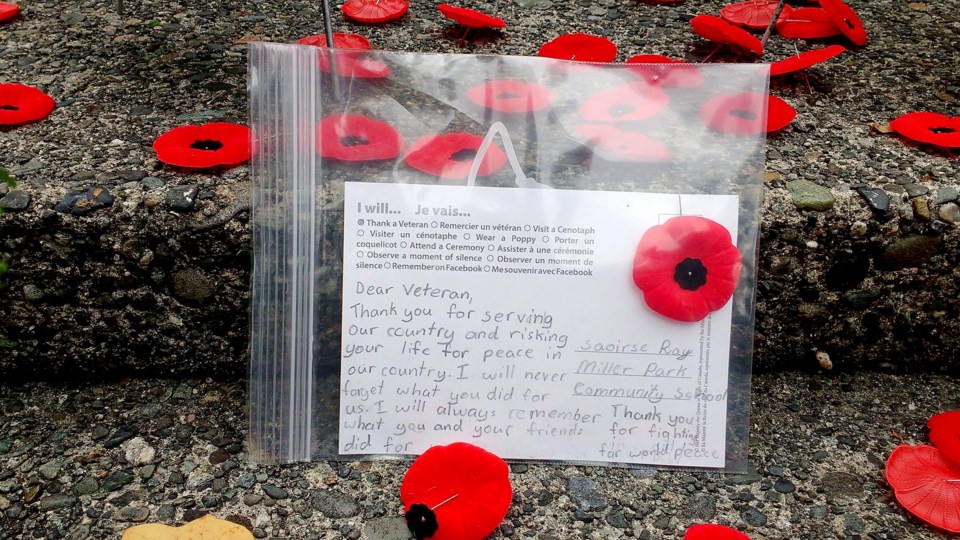 A “postcard for peace” written by a School District 43 student and left at the cenotaph in Port Coquitlam’s Veterans Park.

I am proud to be part of Operation Legacy, in which members and graduates of The War Amps Child Amputee (CHAMP) Program pass on the Remembrance Day message to the younger generation. As Remembrance Day just passed, I would like to pay special tribute to all men and women who have served in Canada’s military, and especially those who lost a limb or limbs in war.

I was born without my left arm below the elbow and have learned to overcome this challenge thanks to programs put in place by amputee veterans of The War Amps. I am thankful for war amputee veterans, as without them and the sacrifices they made for us, the War Amps would not exist as it does today. The War Amps have greatly impacted who I am and holds a very special place in my heart. Without their endless support, I would not be as comfortable with my amputation nor as confident about who I am as a person.

I will always greatly appreciate the way war amputees united amputees after the war and came together to create my wonderful War Amps family.

I hope on Remembrance Day we all took a moment to remember those who have and continue to serve. We commemorate their lives and share their stories so that their sacrifices will never be forgotten.

The photo above was taken at the Port Coquitlam cenotaph. My students wrote “postcards for peace” for veterans and I delivered them to the PoCo Legion on Remembrance Day. Somehow, this one made it to the cenotaph.

Later, a colleague saw a friend’s post on her social media. It was one of my students’ postcards.

I want my students to know that the things they do matter. They can make a difference.

Opinion: Breaking down the 'pseudo-legal arguments' a Vancouver restaurant is trying to use to avoid legal sanctions
Apr 6, 2021 8:00 AM
Comments