Opinion: This Port Coquitlam community garden is one we can all be proud of

It was an educational garden being used by teachers and students at Pitt River Middle School in Port Coquitlam for many years.
Jun 16, 2021 2:05 PM By: Andreina Romero 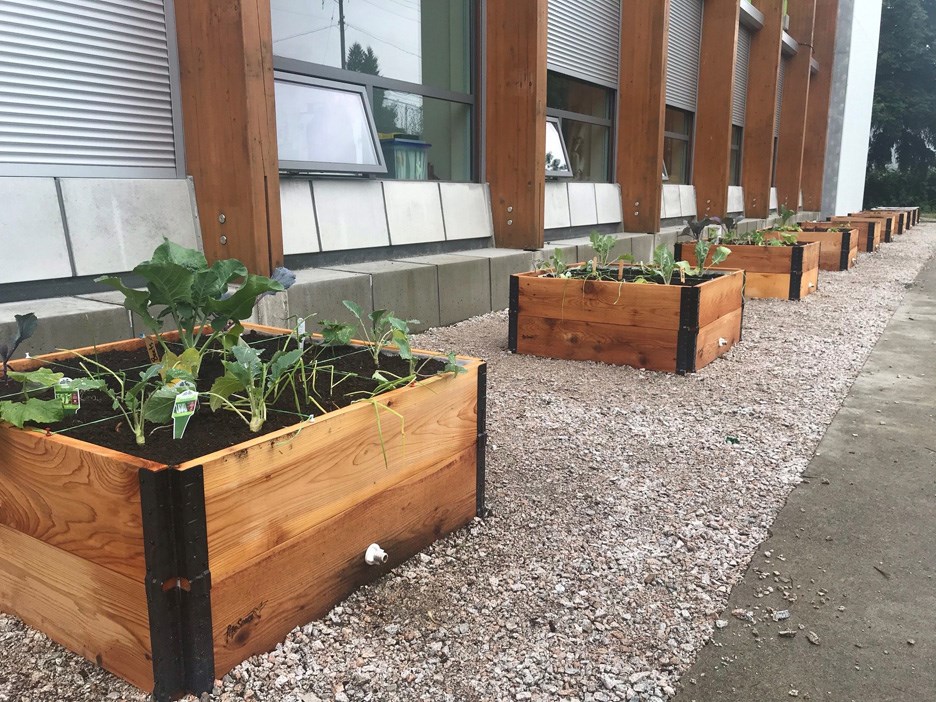 Raised beds for the vegetable and herb garden. Gravel needs to go under the raised beds because the beds have a reservoir in the bottom for watering. Bethony Buckle

It was an educational garden being used by teachers and students at Pitt River Middle School in Port Coquitlam for many years.

But as schools went into remote learning in March of last year, the garden became neglected, despite the efforts of one of its main users, Grade 6/7 teacher Peter Scott.

French immersion teacher Bethony Buckle and the school's Community Development Facilitator, Jennifer Pakulak, decided to join forces and bring the weed situation in the garden under control. The garden sits at the back of the school building, and at the bottom of a hill that faces Pitt River Road.

It's an attractive and secluded space, but large enough for the teachers to realize they would need funding to fix it.

“The weeds were so out of control that we really needed some outside help,” said Buckle. “We had been in touch with the school district, and we were asking for solutions, and it was really hard to find some solutions that were not too expensive.”

In January 2021, Buckle and Pakulak decided to apply to the TD Friends of the Environment Grant, which would provide $5,000 towards the project. The grant was approved, and it allowed the teachers to start the project in earnest. The school’s PAC provided an additional $5,000 and the school district awarded a $500 multicultural grant to the school, double what Buckle and Pakulak had requested.

With funding secured, the teachers reached out to EarthBites, a Vancouver non-profit dedicated to the management and development of school gardens. The EarthBites team, made out of garden experts and educators Brendan Young and Suzanne Fielden, helped design the school garden and develop a year-round plan for its upkeeping. Buckle knew EarthBites from her past work at a Vancouver school district, so she had them in mind as potential partners for the project. “It was kind of a long shot, but I asked them if they were interested in working with us, and luckily they said yes,” Buckle shared.

The goal of the project was to transform the garden into an educational space that could be used by teachers and students year-round. “We wanted to turn the garden into a learning space so that staff and the community could benefit, something for everyone, and turning into a year-round initiative,” Pakulak explained.

“We wanted to keep it student-led and student-driven,” Buckle added, “and make it so that it would be a learning space for the student community mainly.” However, the teachers do envision expanding the learning opportunities to the wider community, by offering visits to students from feeder district schools such as the nearby Central Elementary.

The construction of the garden has been taking place over the last several weeks with the guidance of EarthBites and the help of students and parent volunteers. The garden design includes two main sections, a raised beds section containing seasonal vegetables and herbs, and a pollinating garden made up of native plants.

And even if the school year is almost over, the project's educational component is well underway, with EarthBites facilitator Brendan Young already offering workshops for the students. The plan is to offer these workshops throughout the school year.

Also in the plans, though Buckle and Pakulak noted these are not yet finalized, is to involve the students’ families to take care of the garden during the summer when school is out, perhaps by having weekly spots where they can sign up to water, maintain, and even harvest the fruits of the garden.

Pakulak's vision of the garden is long-term as she hopes the initiative can grow into many more cultural and educational activities in the future: “I see an actual marketplace where the students grow and sell their produce,” she shared.

For Buckle, is all about the connection to the land and the outdoors the garden will offer the students and staff. "My goal is to get the kids connected to this land, where they are from,” she said. “And getting them outside as much as possible; that has always been one of my main goals.”

Buckle and Pakulak would like to extend their gratitude to the following contributors: Mr. Peter Scott and the Pitt River Staff, our parent volunteers, the PAC, EarthBites, as well as support from District Maintenance and this year’s administrators.