Opinion: Why is anybody shocked COVIDIOTS ran rampant on Halloween?

Social media was ablaze on Halloween night – split between outrage over fireworks and the thousands of COVIDIOTS who decided they didn’t care if they got or spread COVID-19.
Nov 1, 2020 8:44 AM By: Chris Campbell 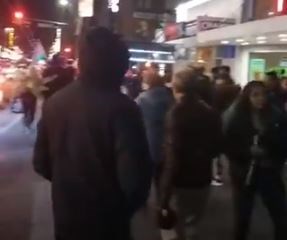 Social media was ablaze on Halloween night – split between outrage over fireworks and the thousands of COVIDIOTS who decided they didn’t care if they got or spread COVID-19.

The videos seen below show an incredible display of ignorance as maskless people congregated on Granville Street in downtown Vancouver.

There are two things I don’t get. Why milling around Granville Street is considered fun, but also why people are so shocked that this happened.

As we’ve seen over and over again, there are thousands of people who refuse to do the right thing.

It was sad and almost comical to listen to provincial health officer Dr. Bonnie Henry and B.C. Health Minister Adrian Dix use their quaint school marm tone as they urged people to practise their “safe six” on Halloween – like that was going to happen.

This is a seriously MASSIVE crowd (Granville & Smithe ) ?! WTH #Vancouver - did you all think there’s no #covid for tonight?! pic.twitter.com/6upwbsX1Fy

Henry even issued a public health order on Oct. 27 limiting social gatherings in private households to no more than six people outside of those who live there.

On Tuesday, Fraser Health authorities then issued separate recommendations for residents of the health region (which covers the territory from Burnaby to Boston Bar, including New Westminster) that recommend no social gatherings of any size in private homes.

This all comes as new federal projections suggest Canadians need to cut a quarter of their contacts to keep the COVID-19 outbreak under control, as several provinces wrestle with how far their lockdown measures should go to reinforce that message.

The government released forecasts Friday indicating that at current rates of socializing in person, Canada could see COVID-19 case counts increase to 8,000 per day come early December. If Canadians reduce their rates of contact by 25 per cent, that number could drop below 2,000, according to the modelling.

Dr. Theresa Tam, Canada's chief public health officer, said the country has lost its lead in the ongoing "dance" with COVID-19 after curbing cases over the summer, and taking it back will require discipline.

"What comes next for us this fall and winter is for every one of us to determine through our decisions and our actions," Tam told a news conference. "Letting down our guard and letting this virus win is not an option."

Tam urged Canadians to limit their contact with others as much as possible, including shrinking social bubbles and maintaining physical distance in public places.

Tam said further restrictions and closures may be needed to buttress these practices in communities where the virus is surging.

But Prime Minister Justin Trudeau said he believes Canada can curb the swell of infections without snapping back to sweeping shutdowns.

"We cracked down with the big hammer of a national lockdown in the spring, but now our tools are more refined," Trudeau told reporters in French. "We know which institutions and businesses ... are more at risk for outbreaks. Therefore, our approach is more targeted."

I wish I had Trudeau’s optimism.