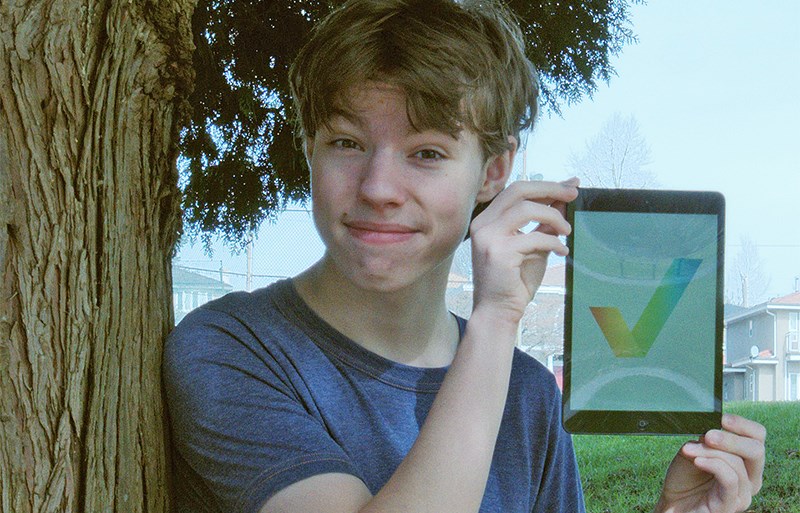 A 15-year-old high school student is hoping to boost voter turnout — especially among young people — with an app that makes it easy to get provincial election information on your smart phone or computer.

VoteMate is the creation of Laef Kucheran, a student of School District 43's Inquiry Hub alternative school, who created the election app as a class project with the goal of getting people to inform themselves before voting in the May 9 B.C. election.

"I think voters are intelligent, they can ask a question, they can do research," said Kucheran, "they don't have to depend on their friends or a Facebook news feed."

An update of VoteVancouver that Kucheran created for the last federal election, VoteMate aims to collect information from 87 B.C. ridings, as well as party positions on important issues such as education, and he'll act as a go-between for voters who have questions for candidates.

He plans to edit out any rude or joke questions and contact the candidates to get the information voters are seeking. In one question, for example, someone wants to know what the Coquitlam-Burke Mountain candidates plan to do about youth poverty, homelessness and mental health.

"It is a fairly arduous process," Kucheran said, "but it is fun for me. It's something I've been interested in doing, I love programming and I'm also interested in politics."

He also hopes VoteMate will bypass the negative advertising and campaigning, and allow users to get unfiltered information directly from candidates.
"You'll be able to directly compare candidates' positions," he said.

For candidates seeking to appeal to the younger voter, it's a no-brainer and he hopes most will sign up to provide information.

It's also extremely easy to use for both the savvy smartphone app user or the luddite who can only manage a desktop computer because VoteMate is simple, elegantly designed and available for Apple and Android smartphones.

Kucheran envisions that people, often so busy yet still connected to their phones, will do their election research on VoteMate while riding the bus or while doing some other activity, and while it is a school project for marks, it has been occupying much of the teen's free time of late.

He spends several hours of every day on Vote Mate, including during spring break, while also getting help from his brother, Alin, and his friend Stefan Clarinval on the app design, plus support for getting the app on onto Google Play and iPhone from Brandon Mayhew, who also attends Inquiry Hub.

When it comes to politics,"the younger voters are really tuned out," he says. VoteMate tries to elevate debate beyond the bubble where voters passively consume information provided to them via their social media.