Another rental building proposed for PoMo

Another 230 rental apartments could be coming to Port Moody. The latest project is being proposed for 3370 Dewdney Trunk Rd. by PC Urban Properties Corp., which presented its plans to the city’s advisory design panel Jan. 17.
Feb 1, 2018 3:43 PM By: Mario Bartel 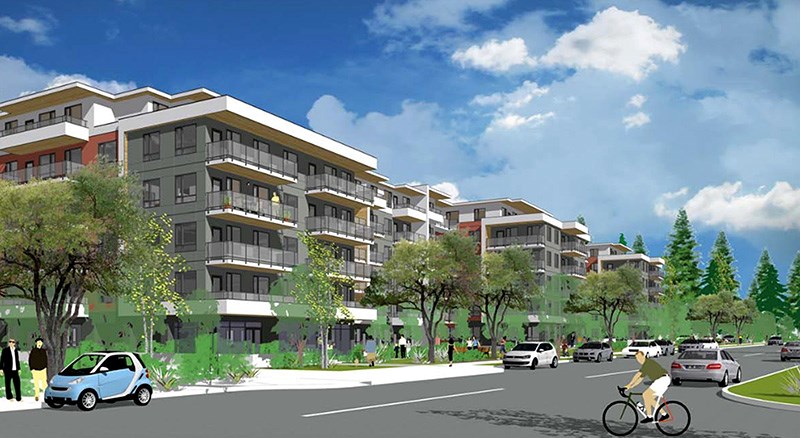 An artist's rendering of a new 230-unit rental building being proposed by PC Urban for a property it owns on Dewdney Trunk Rd. in Port Moody.PC URBAN

Another 230 rental apartments could be coming to Port Moody.

The latest project is being proposed for 3370 Dewdney Trunk Rd. by PC Urban Properties Corp., which presented its plans to the city’s advisory design panel Jan. 17. A mobile home park with 17 pads currently occupies the site. The developer acquired the property last August.

In its presentation, PC Urban said the project will provide “much needed accommodation” in a city with a rental vacancy rate of 0.5% and an aging supply of rental apartments.

The recent arrival of SkyTrain “enhances the desirability of the community and will attract more people” who will need someplace to live. The property is about 400 metres from the Inlet Centre SkyTrain station.

One-bedroom units with an average size of 625 sq. ft. will comprise 38% of the building’s units while the remainder will range from 750-sq. ft. junior two-bedroom suites to five three-bedroom units as large as 1,030 sq. ft.

“This purpose-built rental building will contribute to the diversity of housing options in Port Moody,” PC Urban said in its report.

Because of the project’s proximity to transit, the developer is proposing it be allowed to include only 201 parking spots for vehicles; as well, there will be parking for 181 bicycles.

The building will also include an outdoor play area for children and a 758-sq. ft. common amenity space on the ground floor.

While the developer conceded all trees on the site will have to be removed for construction, they’ll be replaced by a mix of native and adaptive plants, shrubs and shade trees “to reduce the number of constructive surfaces that heat up and contribute to the heat island effect.”

The project will require rezoning and an amendment to the city’s official community plan before it can proceed.

PC Urban's proposed 230 apartments, if approved, would bring to 372 the total number of new rental units in PoMo. Woodbridge Properties received approval to build a six-storey development on St. Johns Street — with 142 rental units — after city council adopted the necessary amendments to its official community plan and zoning at its meeting Jan. 23. The building will be the first new purpose-built rental complex in the city in 30 years.