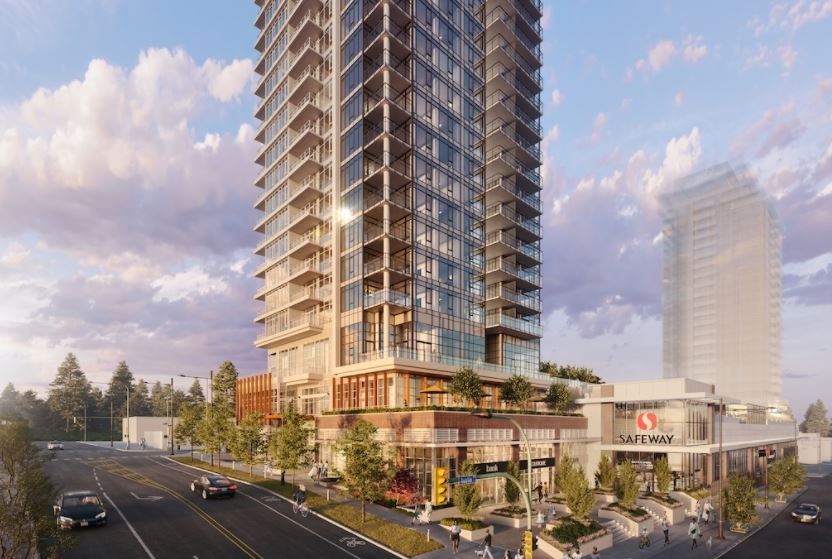 The 25-storey West tower at 505 Nelson Street, Coquitlam, will include about 10,000 square feet of retail and office space and 194 residential condos. It is scheduled for completion in 2024.Beedie Living

Burnaby developer Beedie Living is changing tactics on a “multimillion-dollar” mixed-use tower it is building in the Austin Heights neighbourhood of Coquitlam, to get ahead of soaring costs for building materials.

“We will be self-financing the start of construction,” said company president Ryan Beedie.

Beedie Living will begin construction right away, no matter how many homes they sell in the pre-completion stage, he said.

The 25-storey West tower at 505 Nelson Street, Coquitlam, will include about 10,000 square feet of retail and office space and 194 residential condos. It is scheduled for completion in 2024.

Condo developers traditionally rely on banks to provide financing for the construction start, based on selling a percentage of the homes in pre-construction sales efforts. Lenders typically want to see up to one-third of a new project pre-sold within nine months.

But Beedie said the cost of building materials are rising so quickly that he wants to nail down costs early to keep pre-sale prices in check. He said some developers are considering delaying or pulling projects because of runaway construction costs, especially for lumber.

“It’s a signal that we are going ahead. We are confident in this market,” Beedie said of his company's self-financing plan.

A single sheet of eight-foot by four-foot by half-inch plywood was selling at Home Depot on May 26 at $68.98, compared to an average of less than $40 three months earlier.

Beedie said it is not just lumber prices that are soaring.

While the company did not release precise figures, a Beedie spokesman said the self-financing for the “massive” project, would cost the company “multimillions of dollars.”

Other developers say that, if input costs keep rising, it is housing consumers - whether renters or homebuyers - who will eventually have to pay the freight.

"Prices for land, construction materials and property taxes are increasing, in some cases exponentially," said Zack Ross, COO of Cape Group, a Vancouver residential contractor and development company, suggesting that the higher costs could result in higher rents and condominium prices.

Burnaby sellers ‘have already missed out’ on real estate madness
May 7, 2021 7:00 PM
Comments