Church and developer hoping to build community in Port Moody

What started with a few mats in a church basement could soon lead to affordable housing for 55 families in Port Moody. A proposal to redevelop St. Andrews United Church at 2318 St. Johns St.
Jun 8, 2018 10:42 AM By: Mario Bartel 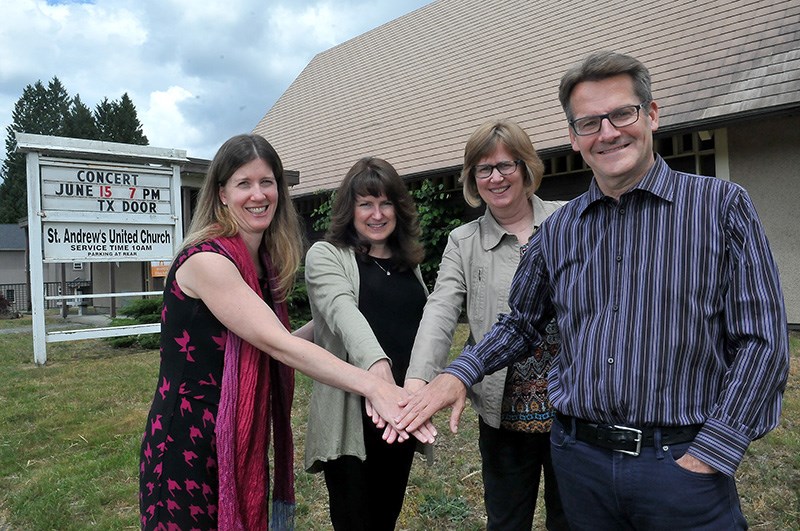 L-R, Claire MacLean, of SHARE Family and Community Services, Christine Scott of Kinsight, Julie LeBrun, the pastor at St. Andrew's United Church in Port Moody, and Robert Brown, the president of Catalyst Community Developments Society, are teaming up to propose a project that would provide 55 affordable housing units, office space for the two community organizations as wells as a new children's centre, along with a new church. The proposal is also receiving support from BC Housing and the United Church of Canada. A public hearing about the project will be held at Port Moody city hall on June 12.MARIO BARTEL/THE TRI-CITY NEWS

What started with a few mats in a church basement could soon lead to affordable housing for 55 families in Port Moody.

A proposal to redevelop St. Andrews United Church at 2318 St. Johns St. into a four-storey building as well as a block of stacked townhouses that would include 55 affordable housing units, along with 2,200 square metres of office space for Kinsight and Share Family and Community Services, is going to a public hearing June 12 at Port Moody city hall. The project would also include a new 540-sq. m home for the church.

St. Andrews’ pastor, Julie LeBrun, said the project was borne from the church’s participation in the Tri-Cities Bridge Shelter program, under which it provided sleeping mats, food and dry clothes in its basement for up to 30 homeless people a night. When that program was replaced in October 2015 by a permanent, year-round shelter in Coquitlam, the 80-member congregation was left casting about for new opportunities to help the community. It decided affordable housing was a pressing need.

But how the church could address that need with its meagre resources proved elusive, LeBrun said.

“We have land and we don’t have any money,” she told The Tri-City News. “It was a bit of a dream and a vision floating around for a while.”

She started looking for development partners but most of them were more interested in profit than public service.

Then LeBrun found Catalyst Community Developments Society, a Vancouver-based non-profit developer that specializes in working with community organizations and municipal governments to build affordable rental homes for households earning between $20,000 and $100,000 a year.

The society’s president, Robert Brown, said security of housing is at the core of Catalyst's mission.

“If you don’t have stability, the stress on daily life is grinding,” he said.

But before Brown could determine if St. Andrews’ dream was a good match for Catalyst’s capabilities, he gave LeBrun a challenge.

“We knew we had something different when they sent us back to work on our mission,” LeBrun said.

The congregation came up with “community” and Brown set out to make that happen by not only providing affordable housing units but also by finding additional partners that offer valuable services for the people living in those units as well as the greater community.

Claire MacLean, the CEO of Share, which provides services like a food bank, counselling, support for seniors and legal advocacy, said, “We’ve long been about building community.”

Her group will share office space with Kinsight, a charitable organization that provides support for families of people with developmental delays and disabilities.

Kinsight will also dedicate space to a new children’s centre that’s been on its wish list since 2004, as well as support for residents of four of the housing units.

Catalyst’s Brown said the amalgam of residences with community services will be unique. “It brings a different flavour to the project,” he said.

And it’s just what Port Moody needs at a time when rising housing prices are putting the community out of reach for many families, said Coun. Diana Dilworth when city council passed the proposal through first and second readings.

“I would really hope this gets embraced by the community,” she said of the project, where monthly rents will range from $750 for the nine non-market studio apartments to $1,662 for the three three-bedroom townhomes.