A proposed redevelopment of the 23-acre Woodland Park townhouse complex in Port Moody could become a showcase for mass timber construction.
Mar 11, 2020 12:53 PM By: Mario Bartel 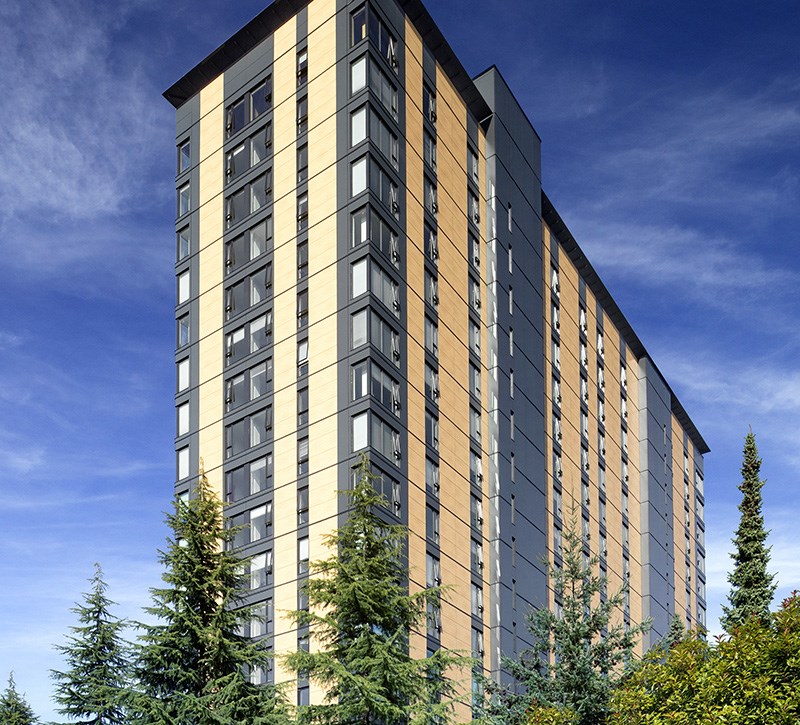 The Brock Commons Tallwood House at the University of British Columbia was the tallest mass timber building in the world when it was completed in 2017. The architectural firm that designed it is proposing a similar construction technique could be used in the redevelopment of Port Moody's Woodland Park.MICHAEL ELKAN/UBC

A proposed redevelopment of the 23-acre Woodland Park townhouse complex in Port Moody could become a showcase for mass timber construction.

Mark Ostry, a principal at Vancouver-based Acton Ostry Architects, said the use of timber materials in the construction of multi-storey and highrise buildings meshes nicely with the project’s goals for sustainability and respect for environmental sensitivity.

“We know first-hand mass timber has many benefits,” he said. “It’s clean and it’s green.”

Ostry’s firm designed the Brock Commons Tallwood House at the University of British Columbia. At the time the 18-storey student residence was completed in 2017, it was the tallest mass timber tower in the world. That record has since been eclipsed by a building in Norway that’s more than 32 metres taller.

Ostry said mass timber construction, which utilizes large solid wood panels for walls, floors and roofs, is fast (the tower at UBC took only 66 days to erect), creates less waste, is more efficient for recycling and requires less transporting of materials through neighbourhoods. He added it also creates an “incredibly quiet” living environment for residents.

Acton Ostry is working with Vancouver developer Edgar Developments on the plan to transform Woodland Park’s 200 rental townhomes in 19 low-rise buildings into a community of approximately 2,000 homes in a mix of buildings ranging from four to 26 storeys in Port Moody’s Seaview neighbourhood along Cecile Drive.

Peter Edgar, the company’s president, said he would “love to explore” the mass timber option as a way to set a “new standard for responsible development.”

He said his company’s proposal to build 325 non-market rental homes in the first of the project’s seven phases is “unprecedented,” and would comprise a significant component of more than $52 million in community amenities for Port Moody. Those include the dedication of new parkland and active trails, improvements to pedestrian and cycling infrastructure in the neighbourhood, and a 5,000-sq. ft. daycare to accommodate 37 children.

Edgar said the non-market housing would be built in partnership with BC Housing and current residents in the complex, which was built in the 1960s, would have first dibs on units. The other phases, one of which includes retail spaces, would follow, with full completion scheduled for 2034.

Ostry said the plan for the development protects wetlands and urban forest in the neighbourhood as well as its sloping topography, with the tallest buildings to be built at the lowest point to minimize their visual impact on residents higher up the hill.

“The landscape is an outdoor living room for the entire community,” Ostry said, adding new buildings will be situated on the footprint of existing structures as much as possible, all parking will be located in underground parkades, a community garden will be located on the roof of the central amenity building and significant trees will be retained.

He said the project will also include a 1.5-km multi-use trail around its perimeter, active and passive green spaces between buildings and even a natural amphitheatre area to support outdoor concerts and community activities.

But Port Moody’s senior planner, Doug Allan, cautions the project still faces major challenges, not the least of which is significant increases in density and building heights than is allowed for the neighbourhood in the city’s current official community plan.

Allan said the project’s distance from transit is also problematic.

“Access is a key issue,” he said, adding the city’s strategy is to encourage densification around transit stations.

Ostry said residents in the project will be “fairly well-served,” with transit connections a 10-minute walk away. As well, it will introduce electric bicycle and car share programs to ease congestion and build a new traffic signal at Clarke Street and Barnet Highway.

The proposal has yet to be presented to council. It received its first assessment by the city’s community planning advisory committee on March 3.