Is third time a charm for this Port Moody development?

Port Moody councillors are describing a proposed condo project cut into the hillside at 3000 Henry St. as “unique,” “beautiful” and “very Port Moody.” Its builder calls that praise “a relief.
Feb 7, 2020 11:00 AM By: Mario Bartel 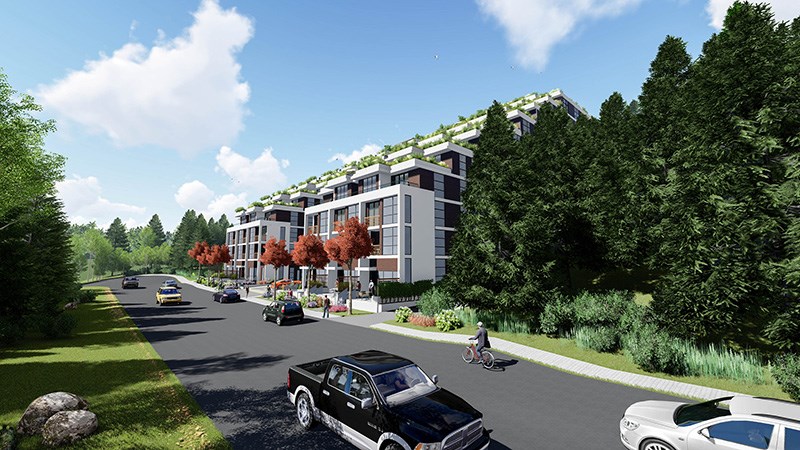 A rendering of a new 173-unit condo being proposed for 3000 Henry St. in Port Moody.SUBMITTED PHOTO

Port Moody councillors are describing a proposed condo project cut into the hillside at 3000 Henry St. as “unique,” “beautiful” and “very Port Moody.”

Its builder calls that praise “a relief.”

Navid Morawej, a real estate financial consultant who grew up in Port Moody and launched his first business venture as a software developer in the basement of a home in the city, said the positive vibes he got from council after he and the project’s architect, Tim Ankenman, were able to give councillors their first formal look at the proposal Jan. 25 are the product of a long and winding process that started in 2006, way before he ever harboured intentions of becoming a developer.

He said the project has evolved considerably since it was first proposed by another builder and then rejected a second time in 2019 after several years of dormancy since it received third reading at council in 2012 because of changes to city bylaws regarding stream setbacks.

For Morawej, it’s looking like the third time may be a charm.

He told The Tri-City News after receiving feedback from Port Moody’s community planning advisory committee last September that more attention should be paid to making units affordable and greater care be taken of the project’s impact on its surrounding environs, he and his team were able to put together a plan that has more units of more variety in a building occupying a smaller footprint so more trees and creek setbacks can be preserved.

The 11-storey terraced, U-shaped complex will now comprise 173 residential units — up from 156 — with two thirds of them either two- or three-bedrooms. Six units will feature lock-off suites that can be used as a mortgage helper or to accommodate relatives who want to live independently while at least 17 will be part of a rent-to-own program to make them more attainable for young, first-time home buyers. One 1,600-sq. ft. unit will also be made available to Kinsight to manage for its assisted living program.

Ankenman told council the building’s footprint will consume less than a quarter of the property, so most of the large trees climbing the hillside can be retained and trails that run through the forest can be enhanced.

That hillside will also reduce the building’s visual impact on the neighbourhood, Ankenman said, comparing its look to the approach renowned B.C. architect Arthur Erickson took to harmonizing his structures with their natural surroundings

“It will blend into the hill and become a landmark building," he said.

Morawej said other features, like co-working space, dog wash and bike maintenance areas, revolving exhibits by local artists in the lobby and possibly even public art in the building’s courtyard, garden plots on the roof and even the possibility of recapturing energy from sewage came from extensive consultation with the community.

“We wanted to make a statement for the community,” he said.

Coun. Hunter Madsen said he was so impressed, “I sort of imagine myself living there.”

The proposal was sent on to staff for further refinement, with particular attention to be paid to finding ways to ease its impact on traffic in the neighbourhood.

Morawej said if all goes well and the necessary amendments to bylaws and the city’s official community plan are adopted, he hopes construction can start in 2021, with completion expected two years later.

02/07: Story updated to clarify the project's timelines through council