Despite many supporters at meeting Port Moody council has concerns
Jul 12, 2019 7:00 AM By: Grant Granger 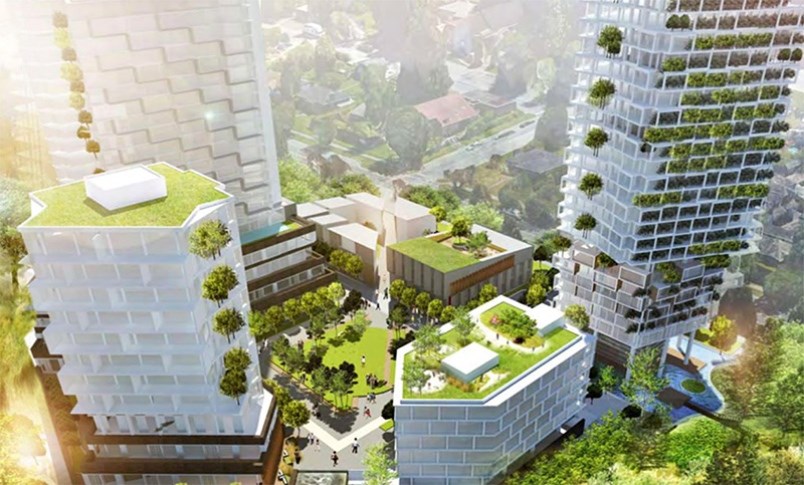 A rendering of what the Westport Village development, on the site of the old Andrés Wine plant, could look like.Andrew Peller Ltd.

The proposed vision for the former Andrés Wine site in Port Moody will to a public hearing later this month, and many who have had early eyes on it like what they see.

Westport Village, which is being proposed by property owner Andrew Peller Ltd., calls for 10 buildings on the 1.5-hectare former industrial site with a mix of condos, rental units, assisted living for seniors, light industrial, retail and commercial space, a boutique hotel, medical clinic, arts centre, an arts village and daycare. The tallest building being planned is 31 storeys.

Council passed first and second readings of the application to change the official community plan to give the development its own zoning designation that would have several stipulations specific to the land.

It is scheduled to go to a public hearing July 23.

Sixteen people have already had something to say on the project. During the public input session prior to Tuesday’s Port Moody council meeting, they all spoke in support with only minimal concerns. The speakers included environmentalist Ruth Foster and Brian Wormald, who is past president of the Port Moody Ecological Society. Foster and Wormald said they are backing the proposal because it proposes restoring the riparian areas of Schoolhouse Creek South and makes other environmental improvements.

Foster said the creek will benefit from the replacement of invasive plants with native ones and she looks forward to the salmon runs getting the respect they deserve. She noted a salmon creek viewing platform is also in the works.

“We lack places where the public can see the spectacle of these species returning to spawn," said the retired teacher who helped found the Mossom Creek Hatchery.

She also said she likes plans for green roofs on most of the buildings and a vertical forest.

The main concern expressed by some councillors and a couple of speakers surrounded traffic because the terms of the rezoning call for a minimum of 940 off-street parking spaces and the project is more than a kilometre from the nearest SkyTrain station, Moody Centre. Peller’s plans include providing a shuttle service and car- and bike-sharing spaces.

Acting Mayor Hunter Madsen said while he likes the range of housing choices and amenities being proposed, he is “haunted” by the decision by TransLink not to build a SkyTrain station near Westport and, as a result, the project could add traffic congestion during rush hour.

“I sure wish that piece of the puzzle  was there," he said. "Not only would that provide a gigantic opportunity to this proposal but help revitalize that area."

“There’s a significant traffic piece missing with the level of density [being proposed],” said Dilworth, who supported taking the proposal to public hearing despite her misgivings. “It’s going to need more than a shuttle bus, more than car share or bike share. The idea of a third SkyTrain station [in Port Moody] is a pipe dream now. Traffic is a top issue in the city right now. We need to bring something better to the residents.”

Coun. Meghan Lahti said Westport may be putting too much density close to industrial activity and it’s too far from SkyTrain.

“I don’t think this is the perfect location. I don’t think it’s going to reduce cars, it’s going to increase cars,” Lahti said. “There are solutions that can be made, but we’re going to have to work hard on them. There are issues in this plan that have to be addressed.”

Coun. Zoë Royer, however, lavished praise on the project and pointed out it’s only a 16-minute walk to the Moody Centre Station.

“This is the only way we can people out of their cars in the west end,” said Royer. “It’s extraordinary.”