A unique partnership between a Port Moody church, two community organizations and a Vancouver-based non-profit developer will create affordable rental housing for 55 families, including four units for people with developmental disabilities.
Oct 12, 2018 8:53 AM By: Mario Bartel 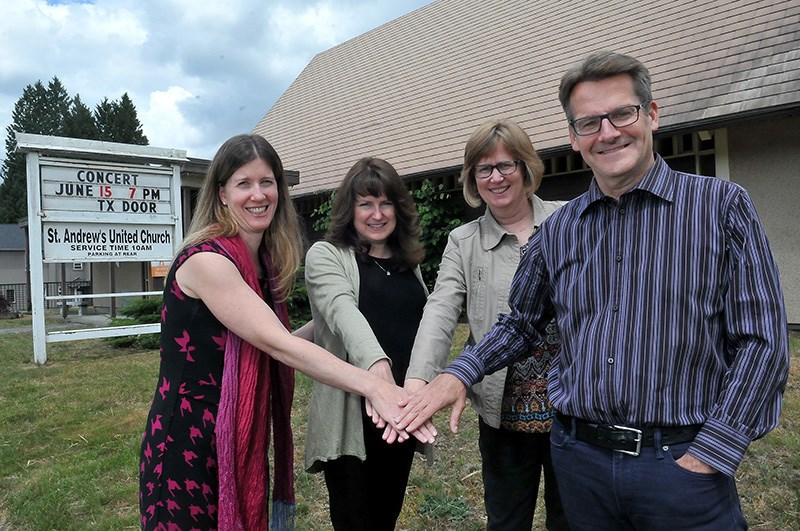 L-R, Claire MacLean, of SHARE Family and Community Services, Christine Scott of Kinsight, Julie LeBrun, the pastor at St. Andrew's United Church in Port Moody, and Robert Brown, the president of Catalyst Community Developments Society, have reason to celebrate as their proposal for a 55-unit affordable housing project on the site of the 1957 church building was approved by Port Moody council on Tuesday.MARIO BARTEL/THE TRI-CITY NEWS FILE

A unique partnership between a Port Moody church, two community organizations and a Vancouver-based non-profit developer will create affordable rental housing for 55 families, including four units for people with developmental disabilities.

Port Moody taxpayers are pitching in, too.

PoMo council approved the project, to be located at the site of St. Andrews United Church at 2318 St. Johns St., at its meeting Tuesday. The city will also be contributing $527,796 from its affordable housing reserve fund as well as waiving more than $241,000 in community amenity charges. As well, BC Housing is providing $5 million in provincial funding.

“We are pleased to support this project,” Port Moody Mayor Mike Clay said in a press release. “Affordable housing is an important issue for council and for Port Moody residents.”

“This is what I would call a good deal,” Coun. Rob Vagramov said at the meeting. “It shows the power of collaborative partnerships.”

That partnership will mean a new 540-sq. m space within the four-storey building for St. Andrews’ 80-member congregation in addition to the housing units, as well as 2,200 sq. m of office space for Kinsight and Share Family and Community Services.

“We are excited to transform our building to include affordable housing, our new partners and new church space,” St. Andrews pastor, Rev. Julie LeBrun, said, adding the church’s programs and services will be held in other locations while the old 1957 building is demolished and the new structure built.

Kinsight, a charitable organization that provides support for families of people with developmental delays and disabilities, will dedicate some of its space to a new children’s centre as well as provide support for residents living in four of the housing units.

“The vision for the children’s centre is to be an accessible and welcoming hub,” Kinsight CEO Christine Scott said.

Share provides services like a food bank, youth counselling and support for seniors along with legal advocacy.

Rents will be geared to gross household incomes of $30,000 for someone seeking a studio unit to incomes of $66,480 for the three-bedroom townhouses. They’ll range from $750 for the former to $1,662 for the latter.

The project is being built by Catalyst Community Development Society, a Vancouver-based non-profit developer that specializes in constructing affordable housing projects in partnerships with community organizations and municipal governments.