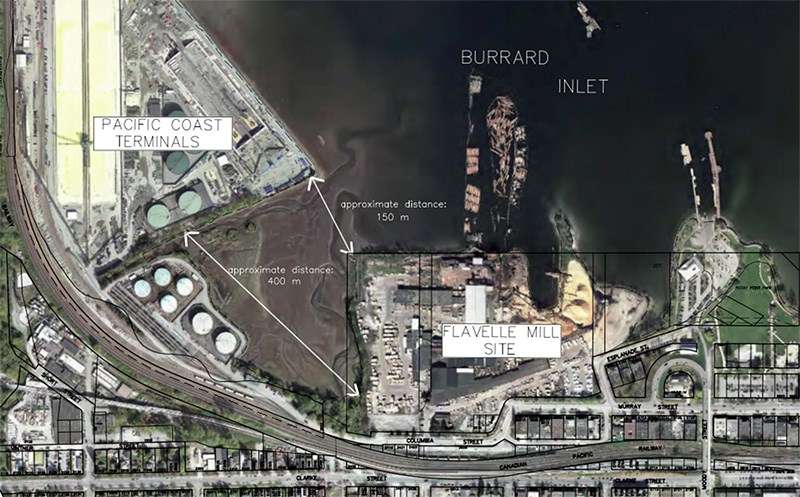 An aerial view that shows the proximity of the Flavelle mill site to Pacific Coast Terminals to the west, and Rocky Point Park to the east.CITY OF PORT MOODY

A proposed development on Port Moody's waterfront took another step after it received support from the region last week.

Metro Vancouver’s regional planning committee last Friday voted to support Port Moody’s proposal to re-designate the 12.7-hectare site next to Rocky Point Park, where the Flavelle sawmill and a small parcel of municipal property now stand, from industrial to general urban use.

The proposal will now go to the Metro Vancouver Regional District board, which will consider a bylaw to amend its regional growth strategy to accommodate the new development.

Port Moody Mayor Mike Clay said he’s confident the Metro board will also give its assent.

“I feel good that the members around the board table will agree with the committee members,” Clay said. “There is strong logic that went into the committee decision.”

“The industrial days of Port Moody as a smokestack mill town are behind us,” he said. “We need to move forward in the modern economy.”

In their presentation to the committee, Clay and Port Moody’s city manager Tim Savoie said redevelopment of the site could create 1,130 new jobs without the loss of any industrial jobs as Flavelle would shift employees to its mill in Surrey. They said the construction of almost 3,400 residential units in 11 towers ranging from 16 to 38 storeys — as well as live-work units and 60 to 70 rental apartments in a low-rise building along with retail, office and light industrial spaces — would “complement… other parts of Port Moody where high density mixed uses are anticipated,” such as the nearby Moody Centre transit-oriented development area.

But Robin Silvester, the president and CEO of Port Metro Vancouver, said in his delegation to the meeting that the Flavelle site should remain industrial “until a regional approach to the protection of industrial land is established.”

Silvester said industrial land, with well-paid jobs and stimulus to the economy, “is vital to the future of our region.”

In his recommendation to reject Port Moody’s request, Metro Vancouver’s regional planner for parks, planning and environment, Jaspal Marwah, cautioned there was no certainty the plan for redeveloping the site would proceed as proposed because Flavelle could end up selling the site, “resulting in a very different development proposal coming forward by a future owner.”

Marwah said the Flavelle site is a particularly important piece of industrial property because it’s large and flat, with waterfront access and close proximity to rail and major road networks.

“The Flavelle site possess unique characteristics that are in demand from a range of industrial operators,” Marwah said, adding there are only four vacant waterfront industrial sites in the region that are the same size or larger than Flavelle.

But Clay said Port Moody has “hundreds of acres of unused waterfront industrial land,” and there’s more in neighbouring Burnaby “that could be activated if it was in such short supply.”

While Marwah conceded Port Moody’s objective to locate high-density development near transit, he said the actual walking distance from most of the site to the Moody Centre SkyTrain and West Coast Express station is beyond the optimal 800-metre radius.

Clay said that ignores the reality that Port Moody is now in an urban containment zone that is well-served by transit.

“We are in the heart of the Lower Mainland and we are expected to take a large share of regional population growth,” he said.

While a previous attempt by the city in 2014 to change the site’s designation was rejected by the Metro board because there wasn’t a development plan in place compelling enough to come at the expense of industrial land, Clay said times, and the city, have changed.

“Today’s industry is high tech, and they need office space and glass fibre, not wood fibre and beehive burners, as the industries of the past,” Clay said. “We want to move forward in that employment space.”