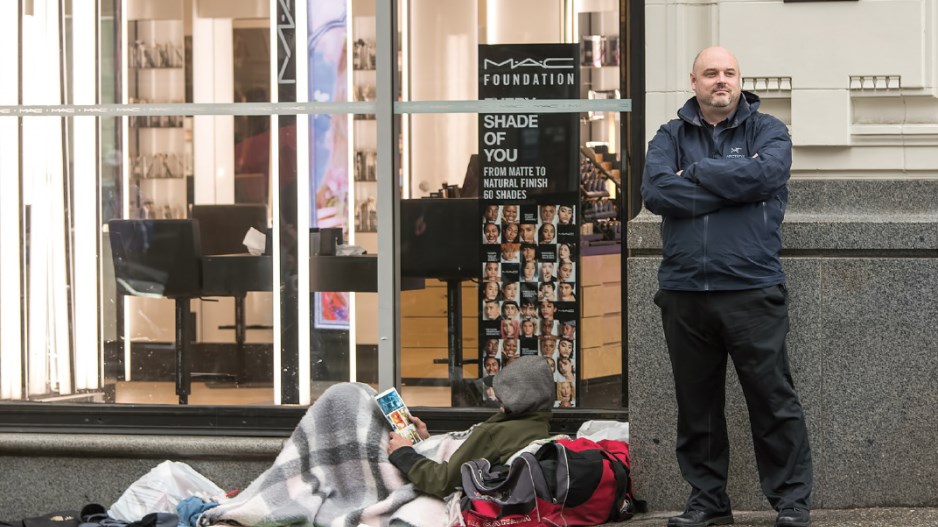 There remains a lot of ground to cover in the two years left of Vancouver’s strategic plan to end street homelessness by 2021. Last year, the City of Vancouver counted 659 residents living on the city’s streets – 30 per cent of its homeless population.

“Everyone thinks it’s easy to get into a shelter. It’s not,” explains Brent Findley, senior manager of security, life and safety at Cadillac Fairview’s CF Pacific Centre.

“We’ve always sort of been in a bit of a homeless crisis, but it’s becoming a mental health and addiction crisis as well.”

While the percentage of Vancouver’s unsheltered homeless population remained relatively unchanged between the city’s 2016 and 2018 homeless counts, the number of people counted as homeless has increased by 18 per cent.

Overnight, many of them take refuge in the alcoves and doorways of Vancouver office towers.

“A lot of the commercial buildings, certainly in the downtown area, are often at the forefront of the mental health /addiction crisis that you see in Vancouver,” says Damian Stathonikos, president of the Building Owners and Managers Association of British Columbia.

“It’s not always at the forefront of people’s minds when they think of the commercial real estate industry.”

Findley manages the security of a city within a city: a downtown mall and eight office and mixed-use towers above it that together attract around 55,000 people per day. “That’s the size of BC Place during playoffs with the Lions, if they’re winning,” he says.

The size and location of Pacific Centre make it attractive to those looking for shelter outdoors, a place to warm up early in the morning or access to public washrooms. The security and cameras around the property offer some sense of protection.

When Findley started in the industry 25 years ago, he says the message to those surviving on the streets was typically to get out and off of a property.

“It’s completely flipped around now. We’re approaching it with the idea of trying to help them,” he explains.

Individuals can sleep on the property overnight, for example, and use its facilities when it opens its doors early in the morning. Night-shift employees conduct life safety checks.

Supporting this work are increased investments in high levels of first aid and mental health training for the company’s 55-person security team. Staff also learn how to de-escalate confrontations through use-of-force training, and must recertify annually.

“We’re always the first responders because it’s on our property,” says Findley.

As government and community stakeholders work on solutions that address issues of homelessness and addiction, many in the building management and security industry are finding ways to manage these issues with compassion.

“We continue to have to shift our focus in the way that we’re approaching this,” says Chad Kalyk, executive vice-president of Paladin Security, which protects more than 10 million square feet of space in downtown Vancouver.

That shift includes a heightened emphasis on mental health awareness training, and offering client services such as safe, accompanied walks for individuals leaving a building. Conducting work with compassion is critical.

“The problem’s not going away. In my opinion it just continues to get worse, so we’ve got to be able to adjust and evolve our processes and policies to support the business operations,” says Kalyk.

There are aspects of Vancouver’s homelessness and addiction crisis that create challenges.

“It’s dangerous. It’s dangerous if you go to take a full garbage bag out of a garbage receptacle,” says Neil Thomson, regional vice-president of Bee-Clean Building Maintenance Inc., explaining that the potential for contact with hypodermic needles poses a health risk to employees.

It’s not the only risk for cleaners who face the homeless situation daily.

“We’ve had several staff accosted or struck or verbally abused for sweeping up cigarette butts or taking away garbage.”

As a result, Thomson says, the company sees significant staff turnover for certain positions. Cleaning staff working shifts in Vancouver’s downtown core get trained in biohazardous waste removal and in the proper disposal of drugs and drug paraphernalia.

Charles Gauthier, president of the Downtown Vancouver Business Improvement Association (DVBIA), says association members have continued to express concerns about the issue and how it ought to be handled in the short term.

Members have been advised to call the non-emergency policy number in the event of a difficult confrontation. Doing so gives the city’s Carnegie Outreach Program the opportunity to connect with individuals directly and offer support.

Over the long term, the DVBIA supports increasing services such as safe injection sites and additional housing options.

The latter is a key component in the city’s homelessness strategy, which states thousands of social, supportive and rental housing units are needed to end street homelessness.

“Asking people to vacate an area is not a solution,” says Gauthier.

“It’s about getting people housed and getting them taken care of, and reconnecting them to the social services that are available for them.”