NEW YORK — Bob Avian, a Tony Award-winning choreographer who had a role in some of the most beloved and influential shows on Broadway, including “Dreamgirls,” “A Chorus Line,” “Follies” and “Miss Saigon,” has died. He was 83.
Jan 22, 2021 11:20 AM By: Canadian Press 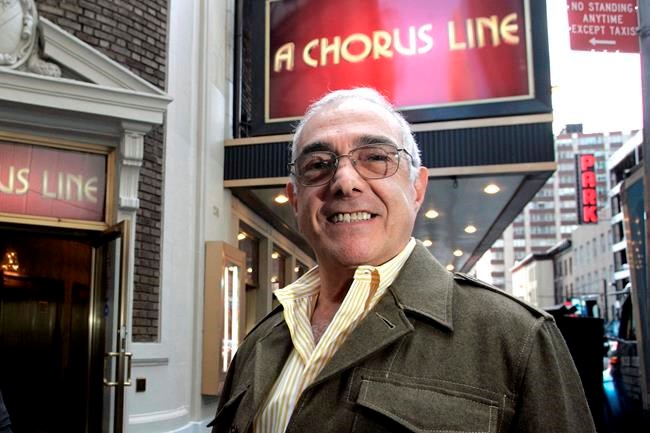 NEW YORK — Bob Avian, a Tony Award-winning choreographer who had a role in some of the most beloved and influential shows on Broadway, including “Dreamgirls,” “A Chorus Line,” “Follies” and “Miss Saigon,” has died. He was 83.

Tony-winner Tony Yazbeck on Twitter called Avian “a sweet and kind spirit who generously gave his creative talents to legendary works.” Marvin Hamlisch said: “His legacy will live on stage for years to come.”

Avian rose from a dancer in “West Side Story” and “Funny Girl” to work alongside such luminaries as Michael Bennett, Cameron Macintosh, Stephen Sondheim and Andrew Lloyd Webber.

It was with Bennett that Avian enjoyed a long professional partnership, working as associate choreographer or assistant director on such Bennett-choreographed productions as “A Chorus Line,” “Promises, Promises,” “Coco,” “Company,” “Follies, “Seesaw” and “God's Favorite.”

“For someone so talented, he remained remarkably modest about his own achievements on so many landmark musicals,” said Cameron Mackintosh in a statement. “He facilitated the genius of Michael Bennett and with every little step he took taught me more about the art of staging a modern musical than virtually anyone else I’ve met. It was a privilege to have been his friend and colleague for over 35 years.”

He was a producer on the original “Dreamgirls” and “Ballroom” and did musical staging for “Sunset Boulevard” starring Glenn Close in 1994, “Putting It Together” with Carol Burnett and the original “Miss Saigon” with Lea Salonga in 1991.

Avian's association with “A Chorus Line” continued when he directed the 2006 revival on Broadway and the London revival at the Palladium in 2013. He also directed touring versions.

He earned a bachelor's degree from Boston University and also studied at Boston Ballet School. In 2020, his memoir “Dancing Man: A Broadway Choreographer’s Journey” co-written with Tom Santopietro was published by University Press of Mississippi.

He is survived by his husband, Peter Pileski, and a sister, Laura Nabedian.