LONDON — Britain is expanding a coronavirus vaccination program that has seen almost 6 million people get the first of two doses — even as the country’s death toll in the pandemic approaches 100,000.
Jan 24, 2021 3:46 AM By: Canadian Press 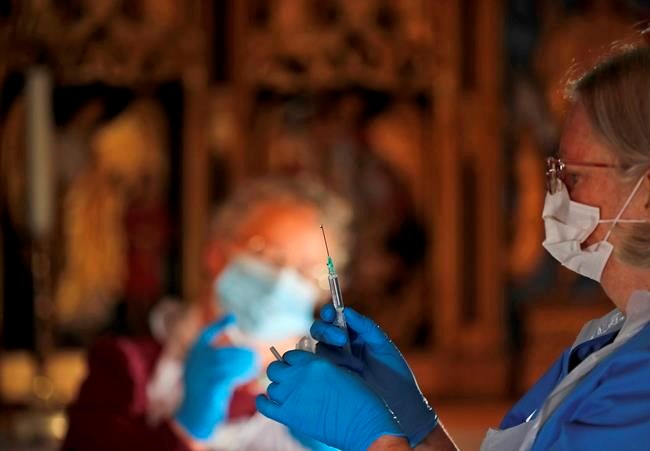 LONDON — Britain is expanding a coronavirus vaccination program that has seen almost 6 million people get the first of two doses — even as the country’s death toll in the pandemic approaches 100,000.

Almost 5.9 million doses of vaccine had been administered by Saturday. Health officials aim to give 15 million people, including everyone over 70, a first vaccine shot by Feb. 15, and cover the entire adult population by September.

Britain is inoculating people with two vaccines — one made by U.S. pharma firm Pfizer and German company BioNTech, the other by U.K.-Swedish drugmaker AstraZeneca and Oxford University. It has authorized a third, developed by Moderna.

It is giving them at doctors’ offices, hospitals, pharmacies and vaccination set up in conference halls, sports stadiums and other large venues. Thirty more locations are opening this week, including a former IKEA store and a museum of industrial history that was used as a set for the TV show “Peaky Blinders.”

Britain’s vaccination campaign is a rare success in a country with Europe’s worst confirmed coronavirus outbreak. The U.K. has recorded 97,329 deaths among people who tested positive, including 1,348 new deaths reported Saturday.

The U.K. is set within days to become the fifth country in the world to record 100,000 COVID-19 deaths, after the United States, Brazil, India and Mexico — all of which have much larger populations than Britain's 67 million people.

Some health experts have questioned the Conservative government’s decision to give the two vaccine doses up to 12 weeks apart, rather than the recommended three weeks, in order to offer as many people as possible their first dose quickly.

AstraZeneca has said it believes a first dose of its vaccine offers protection after 12 weeks but Pfizer says it has not tested the efficacy of its jab after such a long gap.

The British Medical Association says the government should “urgently review” the policy.

But Anthony Harnden, deputy head of the government-advising Joint Committee on Immunization and Vaccination, defended the policy, saying the U.K. is in a “dire situation.”

“Every dose of vaccine we give as a second dose, we’ll be denying somebody their first dose at the moment and denying them very good protection,” Harnden told Sky News. He said the policy of prioritizing first doses would “save thousands and thousands of lives.”

Britain’s latest surge is being fueled in part by a new virus variant first identified in southeast England, which scientists believe is more transmissible than the original strain. They also say it may be more lethal, though that evidence is weaker.

The British government has said it may tighten quarantine requirements for people arriving from abroad in an attempt to keep out other new variants discovered in South Africa and Brazil. Already to Britain must self-isolate for 10 days, but enforcement is patchy. Authorities are considering requiring arrivals to stay in quarantine hotels like Australia demands.

The U.K. is several weeks into a lockdown to try to slow the spread of the virus. Pubs, restaurants, gyms, entertainment venues and many shops are closed, and people are required to stay largely at home.

The lockdown rules will be reviewed on Feb. 15, but the government says it is too soon to think about easing the restrictions.

“There is early evidence that the lockdown is starting to bring cases down, but we are a long, long, long way from being low enough,” Hancock said.

EU, US agree to suspend tariffs over Airbus-Boeing dispute
Mar 5, 2021 9:37 AM
Comments