The new data for the Fraser North region of Fraser Health — which includes the Coquitlam, Port Coquitlam and Port Moody, as well as Burnaby, New Westminster, Ridge Meadows and Maple Ridge — marks a significant decline in new cases after weeks of exponential growth.
Dec 4, 2020 2:26 PM By: Stefan Labbé 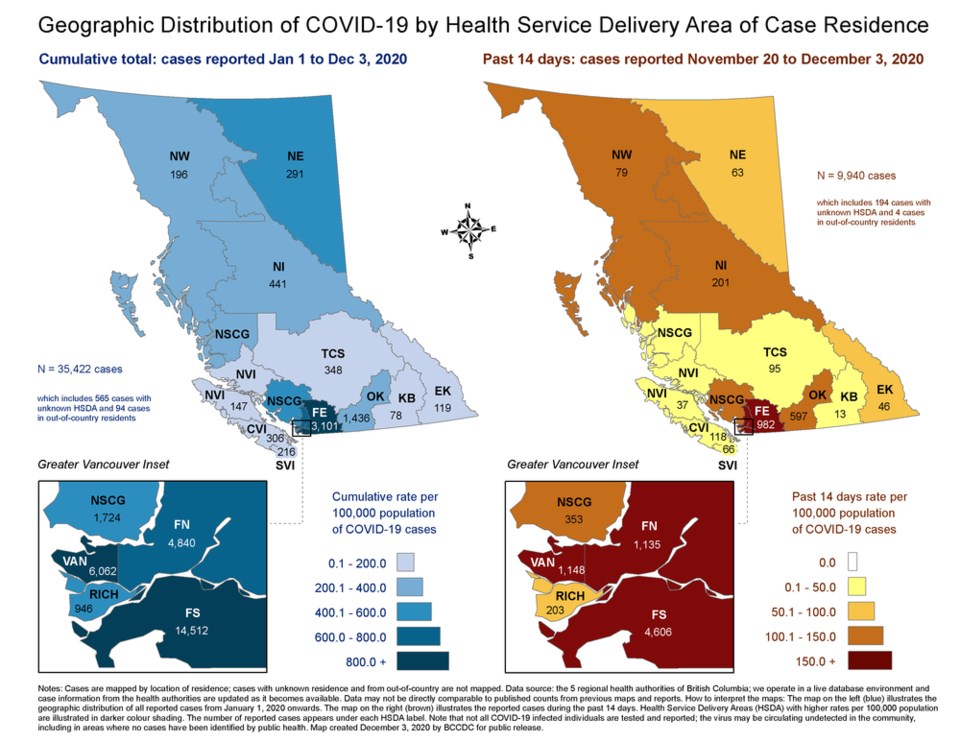 The Tri-Cities’ health delivery area reported 489 new cases of COVID-19 in the week ending Dec. 3, marking a 31% drop in new cases compared to the previous week.

The new data for the Fraser North region of Fraser Health — which includes the Tri-Cities, Burnaby, New Westminster and Ridge Meadows and Maple Ridge — marks a significant decline in new cases after weeks of exponential growth.

However, the release of last week’s new case data was delayed by several days due to a reporting error, and it’s not clear how that may have affected the week-to-week trends in new cases.

There have now been 4,840 cases of COVID-19 reported in the health delivery area since the start of the pandemic.

Despite the downturn in new local cases, active cases across British Columbia remain at levels not seen since the start of the pandemic, and breached the 9,000 mark for the first time Thursday. Some of the highest growth in transmission rates are now being recorded outside of B.C.’s Lower Mainland, though Fraser Health still accounted for 67% of all new cases as of Thursday, Dec. 3.

Deaths attributed to COVID-19 — which tend to spike after a surge in new cases — have also continued at a grim pace across the province, continuing in the double digits for several days now.

The current restrictions will remain in place until Dec. 7, at which time Henry has said her team will make further decisions on how best to stem the transmission of the virus in the lead up to the holiday season.