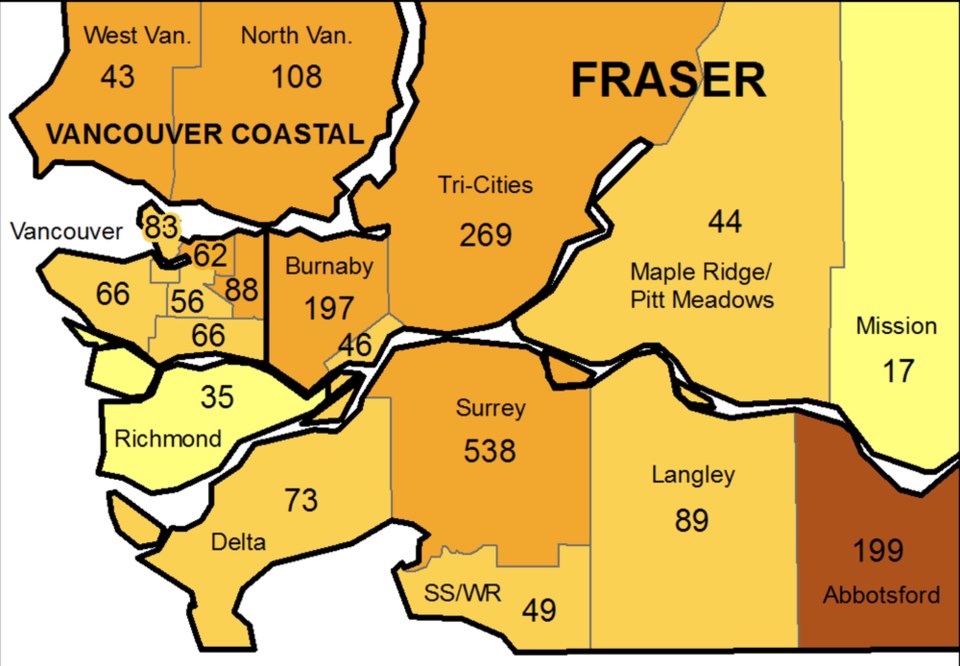 Between Feb. 7 and 13 the Fraser Health reported 269 cases in the Tri-Cities, more than a doubling of the 109 cases in the previous week BCCDC

The Tri-Cities saw a drastic spike in COVID-19 cases last week as new cases outpaced nearly every other jurisdiction in Metro Vancouver.

The weekly case count climbed to 269 from 109 during the previous week. That’s a 147% increase in the number of cases, and a total only outpaced by Surrey, despite several other jurisdictions containing larger populations.

The spike in cases comes amid a surge in school exposure events, which climbed to 31 across the three cities Wednesday, including a cluster at a Port Moody elementary school that forced the principal into isolation and required a neighbouring school administration to rush in to fill the void.

In what appears to be a super-spreader event at a Port Moody pub, dozens of cases appear to be linked to a recent trivia night. Other businesses hit with the virus include workers at a Port Moody Shoppers Drug Mart, as well as a Safeway and two Real Canadian Superstore locations in Coquitlam.

The contagion has also made its way into a local hockey league: on Wednesday, the Port Moody Amateur Hockey Association revealed four of its players had tested positive for the coronavirus, prompting the league to pause its season.

Fraser Health is also working at containing outbreaks in two institutional settings in Port Coquitlam. Over the long weekend, the health authority declared an outbreak at the Shaughnessy Care Centre, a long-term care home where at least two residents have tested positive for the virus despite ongoing vaccination efforts.

And at the North Fraser Pretrial Centre in Port Coquitlam, at least 26 people have tested positive for the coronavirus as public health teams work to snuff out one of three outbreaks in Metro Vancouver jails.