'We are not safe,’ agree Coquitlam teachers in call for school mask mandate 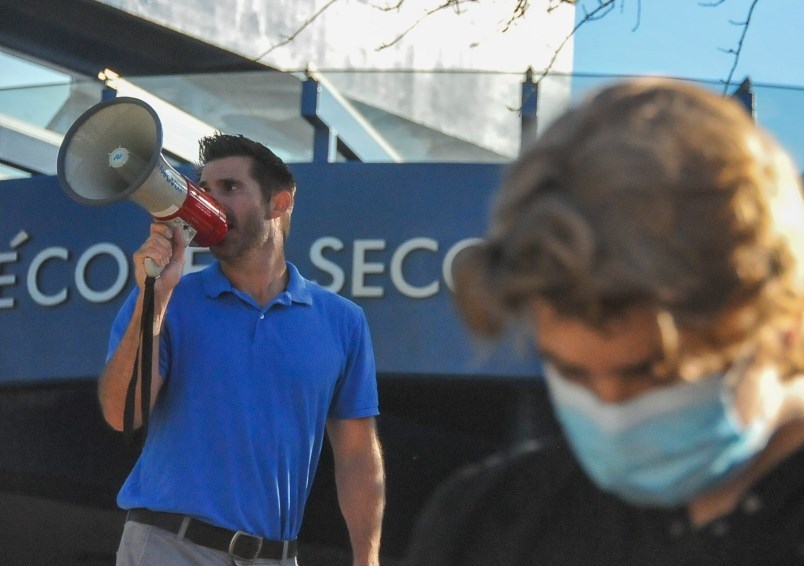 Vice-principal Joel Nelson gives instructions over a loudspeaker on new physical distancing protocols to stem the transmission of COVID-19 outside Dr. Charles Best secondary on the first day of school, Sept. 10. - Photo via Tri-City News files

A cry for help by Surrey teachers hit hard by COVID-19 has the backing of the Coquitlam Teachers Association.

CTA President Ken Christensen said he supports the aim of the Surrey teachers’ “We are not safe” letter sent to Dr. Bonnie Henry on Tuesday, Dec. 15 whose plan for schools was last updated in November.

The call comes as several more COVID-19 exposures are being investigated in School District 43.

Coquitlam teachers want mandatory masks in schools, too, said Christensen, and reduced density in schools, and he said he brought these issues to the attention of Fraser Health and supported them through the BC Teachers’ Federation.

“I’ve been asking for many months and completely support a universal mask mandate in schools as well as reduced classroom density,” Christensen said in an email.

However, he expects the lack of funding is the reason more online options aren’t being provided or classrooms aren’t been made smaller.

A Coquitlam parent who is also a Parent Advisory Council chair at a middle, elementary and secondary school in the district also supports the Surrey letter, stating that while masks are required indoors in most places, they aren’t everywhere at all times in schools.

“I’ve heard from teachers — they feel they are carrying the economy and that’s a legitimate concern for teachers,” said Davis, who suspects there are more cases in schools than reported publicly.

“I realize the response (is) ‘Well, look this isn’t where things are spreading,’ [but] until we test everybody we won’t know for sure and we can’t test everybody,” Davis said.

His wife is a teacher in Surrey and his son’s high school, Dr. Charles Best, has been hit four times by coronavirus exposures, and Davis, who is hopeful a new vaccine will improve matters, said COVID-19 has caused anxiety and disruption of lives for many people.

Indeed, his own family self-isolated and got tested because his son had lunch with a teen who had tested positive. The tests came back negative for his family, but Davis said he knows of families where a coronavirus exposure has been extremely traumatic.

“This insidious disease came to their house and they had to self isolate and remove themselves from school. They were worried about people saying they were lazy or did something wrong,” he said.

The father admitted that his wife, who is an elementary school teacher in Surrey, is also worried she might catch the virus.

The Surrey teachers’ letter expresses concerns about overcrowding in schools and numerous exposures, including teachers that have been infected, requiring hospitalization.

“We are not safe,” the letter states, calling on Dr. Bonnie Henry to require 50% density in schools and mandate masks in all indoor spaces in schools.

“We need to have a mask mandate. We need to be able to physically distance students by reducing classroom density to 50%. In any other indoor public setting, there would be fines to have 30 people sitting close  together in one 75 square meter space without masks. In jurisdictions across the world, students wear masks inside classrooms. It’s one of the most important layers of protection against the transmission of the virus,” states Julia MacRae, first vice president of the Surrey Teachers’ Association in her letter to Dr. Henry.

However, the letter comes just days before schools close for two weeks.

Boredom-buster ideas to stay fit, have fun in Port Coquitlam over the holidays
Dec 14, 2020 2:50 PM
Comments