Port Moody police said there has been a rise in 'swatting' calls throughout the Tri-Cities over the past week; it's not yet clear who is responsible
Apr 8, 2021 12:40 PM By: Stefan Labbé 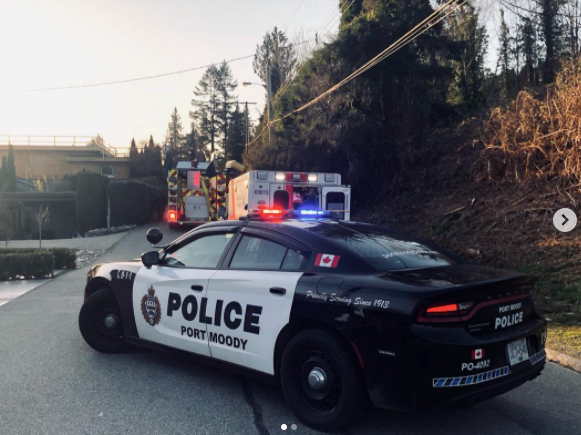 Members of the Port Moody Police Department respond to an unrelated incident. Instagram

Students and staff at a Port Moody middle school were evacuated Thursday morning after police received a call from a man saying he’d placed three pipe bombs at the school and was waiting outside with weapons.

By 9:58 a.m., the call was determined to be a hoax and students and staff have since returned to class.

“At this point, it is believed that this was the latest in a series of so-called ‘swatting’ calls that has been occurring throughout the Tri-Cities over the past week or so,” said PMPD Sgt. Ian Morrison in a press release.

Such calls “appear to originate out of the country and via the Internet,” added Sgt. Morrison. “The origin of these alarming false reports in under investigation.”

This is not the first time 'swatting' incidents have plagued the Tri-Cities. In 2015, a Coquitlam teen was handed a 16-month custodial sentence for making dozens of hoax calls and provoking massive police responses across North America: in one incident, the teen threatened to blow up Simon Fraser University, in another, he targeted the Space Mountain ride in Disneyland.