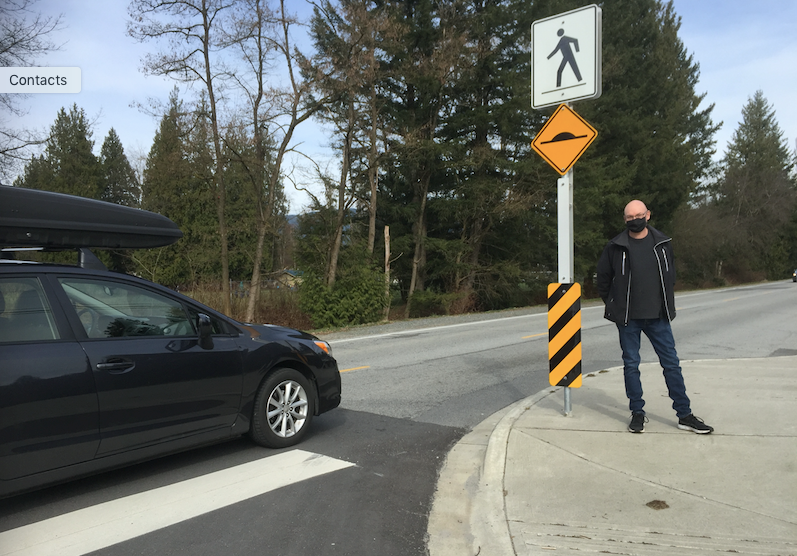 Chris Whelan says the raised crosswalk at Pinemont Avenue is a safety hazard to both drivers and pedestrians. It was put in last year as part of a second wave of traffic calming initiatives to slow traffic on the route between Port Coquitlam and Coquitlam's growing Burke Mountain.Diane Strandberg

An “aggressive” speed bump that was put in to slow traffic on Cedar Drive in Port Coquitlam is causing more problems for residents than it was meant to fix, says a resident.

The narrow road with a deep ditch on one side has become a major thoroughfare — with more than 6,000 cars a day — and is likely to see more traffic as development grows in the Burke Mountain area of neighbouring Coquitlam.

But Chris Whelan says the raised crosswalk at Pinemont Avenue is a safety hazard to both drivers and pedestrians. It was put in last year as part of a second wave of traffic calming initiatives but he says he wasn’t asked if it was needed and would have preferred a roundabout or even a four-way stop.

“Cedar is one of the main routes when they put these traffic calming bumps in — maybe they’re not allowed to change the [speed] sign — but it’s still 50 km an hour. If you hit one of these bumps at 50 km, you’re flying.”

Another problem, he said, is that drivers exiting on to Cedar Drive from Pinemont Avenue face back ups and have to negotiate gridlock when cars do slow down on Cedar. He’s worried a pedestrian could get hit because drivers are so focused on getting into traffic.

“These are pretty big bumps. They are pretty aggressive. I’m a great supporter of Port Coquitlam. They do a lot of really great things…. I’d hate to see them waste money to take them out. They could have sent out a petition to each of us or something to get more input on this [but] I saw nothing,” said Whelan, who has lived in the area for 20 years and has never seen traffic problems so bad.

Whelan said his concerns escalated when flashing lights brought him out to Cedar Drive at 8 p.m. on March 10 to witness a car flipped onto its roof.

Coquitlam RCMP say the raised crosswalk was not a factor in the incident, but with the investigation still ongoing, wouldn’t provide a cause.

Whelan believes that even if the speed bump didn’t cause the accident, “it certainly didn’t help,” and calls the speed bumps “spite bumps,” believing they were put in to discourage people from taking the route to get to new developments along on Burke Mountain.

The city’s director of engineering and public works, meanwhile, maintains the raised crosswalk at Pinemont was installed for traffic calming not for intersection control because speeding and safe pedestrian crossings were the main issues.

Smith also noted that the Cedar Drive traffic calming measures have strong public support and were implemented in response to resident feedback and vehicle count information.

Meanwhile, Coquitlam has plans for its own section of Cedar Drive — close to its border with Port Coquitlam — where it plans a $16.5-million capital works project in preparation for the Partington Creek neighbourhood on northeast Burke Mountain.

However, finding a solution to the traffic is taking time with discussions on the best route for the Fremont Connector ongoing since at least 2015.

In the meantime, Whelan hopes the city of Port Coquitlam will look further into safety issues with the raised crosswalk at Pinemont.

“Before the bumps I could safely cross Cedar as a pedestrian and merge from a a side street with relative ease. Now, it is a game of cat and mouse. Nobody I have spoken to asked for these bumps, and they should be removed.”

Crumbling road to Minnekhada park in Coquitlam to be upgraded for Burke growth
Mar 18, 2021 12:02 PM