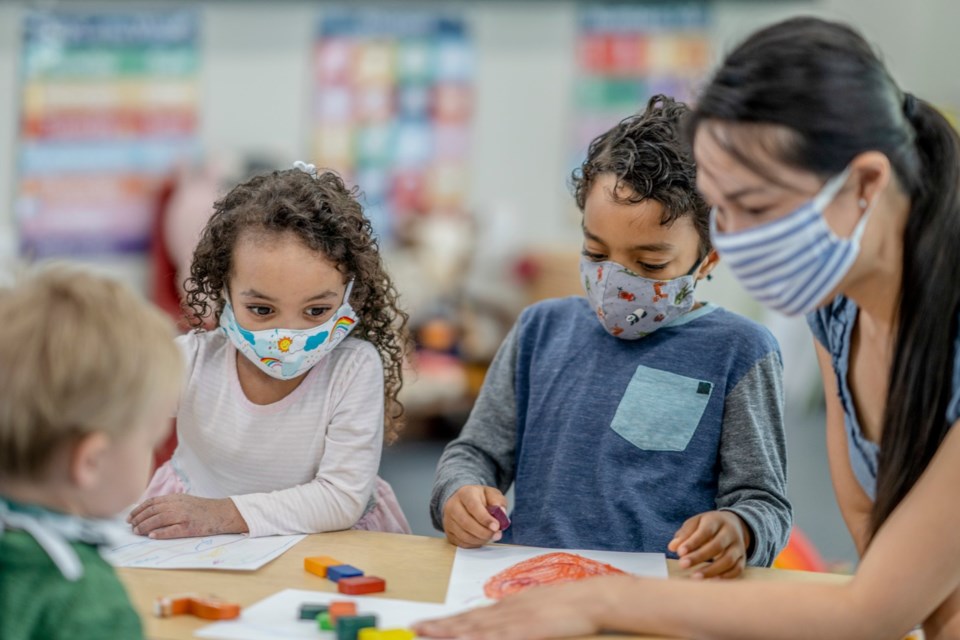 Could $10 a day child care be coming to School District 43 schools?

That’s a possibility the NDP government is pushing as it promotes a plan to make child care part of the portfolio of the new education minister.

New Westminster MLA Jennifer Whiteside has been tasked with the job of “providing universal access to before and after school care,” according to a mandate letter given to her in late November.

While a few Tri-City daycares are part of a provincial $10-a-day pilot, the idea of schools being responsible for child care is relatively new, and one that is providing challenges for SD43 trustees.

At a public Zoom board meeting Tuesday, trustees raised questions about affordability of the province’s school-based child care plan, given uncertainty of federal funding, and whether schools have space, capacity and experience to run child care facilities.

“It’s still a lot more questions than answers,’ said Coquitlam trustee Craig Woods, who expressed concerns that making before and after childcare the responsibility of schools would conflict with education priorities.

“Will we ever find ourselves in a situation where a child care agenda and an education agenda compete with each other?” Woods said, noting that education should be a priority for local schools.

Trustees were presented with a new updated policy that reflects the intent of Whiteside’s mandate letter. In it SD43 noted that it will continue to work with existing child care providers but they would have to adhere to specific requirements, including making sure the program provides inclusive care and fosters indigenous reconciliation.

The policy also says the district will review on an ongoing basis the need for child care and, if programs are to be provided on board property, SD43 will consider whether they should be provided by licensees other than SD43, SD43, or a combination of both.

And while the policy didn’t set how much families would pay if the district decided it should run a child care program on school grounds, it noted fees would be “no greater than the direct or indirect costs SD43 incurs in providing the child care program.”

Secretary treasurer Chris Nicolls said the district is still gathering information on what it would cost to run a child care on school grounds as well as presenting the updated policy to groups — including current child care providers — with the goal of bringing it back for review in March.

However, even with the new policy in place, Nicolls said it would be difficult for the district to increase child care capacity because schools are already full.

“Even if we have the need we may not have the capacity,” he said, noting that only 10 applicable schools don’t have child care, and it’s because there is no room.

However, he said the district will continue to monitor the need through an ongoing task force that is studying child care access in Coquitlam, Port Coquitlam and Port Moody.

“We are going to look for interest from day care providers and future day-care providers if they have identified that there is a particular demand for space,” he said.

Getting schools involved in providing child care is not a new idea.

Sharon Gregson, a proponent of the $10aDay plan, has called on all levels of government to invest public dollars into school-based and non-profit run childcare facilities.

Extolling the virtual of cheaper child care, she told the Tri-City News: “These pilots are absolutely life-changing for people. I hear parents describe it say they can actually start paying off their credit cards, saving for the future and buying nutritious food.”

Port Coquitlam Mayor Brad West has also gone on record as saying schools should be more involved in providing child care while the John Horgan government has made it clear via minister Whiteside’s Nov. 26 mandate letter that there is value to providing child care on school grounds “so parents know their children are safe at one place for the full work day.”

But trustees acknowledged hurdles remain, the primary one being funding, and the province has yet to fully flesh out its plan for schools as child care providers.

“As of yet, (child care minister of state Katrina) Chen has not confirmed how the plan will work and how the school district will be involved in it,” said Coquitlam trustee Jennifer Blatherwick.

Still, treasurer Nicolls said the district needs to be proactive in setting policy and noted that other districts have experimented with a “seamless day” for students who spend all day at the school while their parents work.

“It’s not on our immediate radar to become a licensee, but it’s certainly an area we need to explore, [such as] what that might look like and how that may be delivered,” Nicolls said.