At 26 years old, Tali Campbell is rising through hockey's office ranks quickly and is now touted as a general manager within the Pacific Coast Amateur Hockey Association.
Jul 10, 2021 1:05 PM By: Kyle Balzer 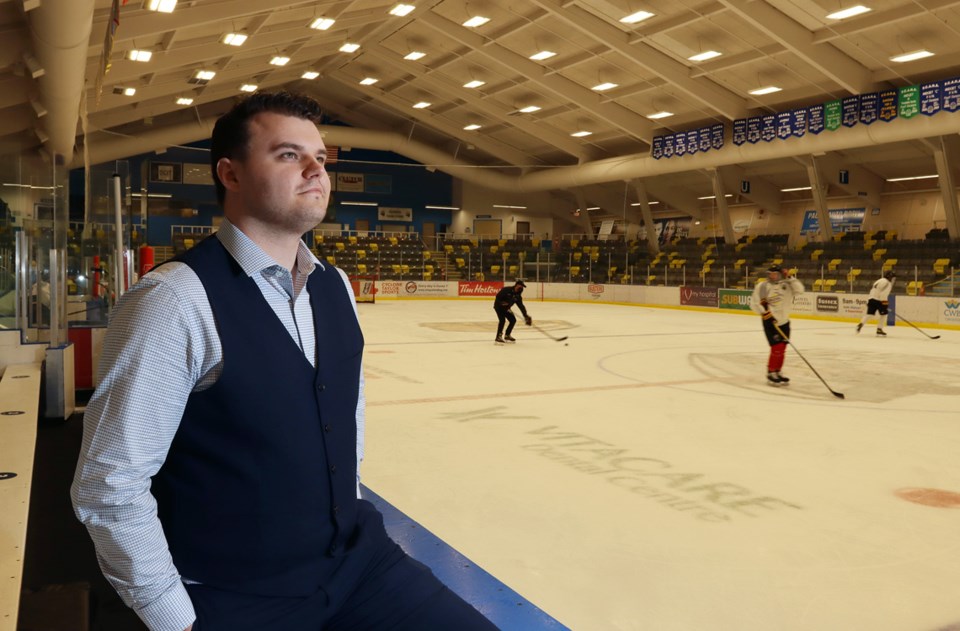 Tali Campbell, 26, is the youngest general manager in the BC Hockey League with the Coquitlam Express. He's also taking on the role as GM of the PCAHA Female District Development Program.MARIO BARTEL/THE TRI-CITY NEWS

Tali Campbell is a name Tri-Cities hockey players, parents and volunteers will continue to hear in seasons to come.

He turned 26 years old on May 1, signed a contract extension as Coquitlam Express general manager 26 days later, and now, more than six weeks later, he's set to take on a new role within the region's hockey community.

On July 7, Campbell was announced as a new GM within the Pacific Coast Amateur Hockey Association (PCAHA) — the organization that oversees 44 minor associations or leagues in B.C.'s Lower Mainland including Coquitlam, Port Coquitlam, Port Moody and Tri-Cities Female.

More specifically, he's set to manage the PCAHA's female district development program as it enters its fourth season of offering high-level competition for young athletes in allowing them to stay at home with schools and other teams.

According to the association, the program is also hoping to grow and foster female hockey across the Lower Mainland by providing mentorship opportunities for girls wishing to become players, coaches, referees and administrators.

"I am really excited for this new adventure," said Campbell in a social media post. "Really looking forward to getting started and helping elevate female hockey in our communities."

He's set to steer PCAHA female development in a new direction as well with the organization explaining the under-15 program is expanding to under-13 players starting in the fall.

"The mandate of the program is to provide a pathway of excellence for players looking to challenge themselves and take their game to the next level, whether that is U18AAA, collegiate hockey or simply just maximizing their own potential," the PCAHA said.

"Participation in the program is open to all PCAHA-registered female players, whether playing in a female or integrated PCAHA league and the schedule will be structured around regular Female League play to minimize conflicts with a player’s club team."

Campbell's new role is simply an addition to his résumé as he'll remain general manager and vice-president of the Coquitlam Express.

The Nanaimo product signed a three-year extension in May this year after completing his first go-round in the shortened 2020-21 pod season.

He's currently one of the BCHL's youngest executives.

Before his Coquitlam hire, he took over as GM of the Nanaimo Clippers at 25 years old part-way through the 2019-20 campaign after spending about a year as their Director of Business Operations.

Port Coquitlam Olympian aims for happy ending to her story in Tokyo
Jun 22, 2021 10:50 AM
Comments