After eating spiciest foods on the planet, McCloskey will shave himself hairless on Boxing Day to boost final food bank fundraising tally to $21,000 to support Share Family and Community services
Dec 25, 2020 8:00 AM By: Diane Strandberg 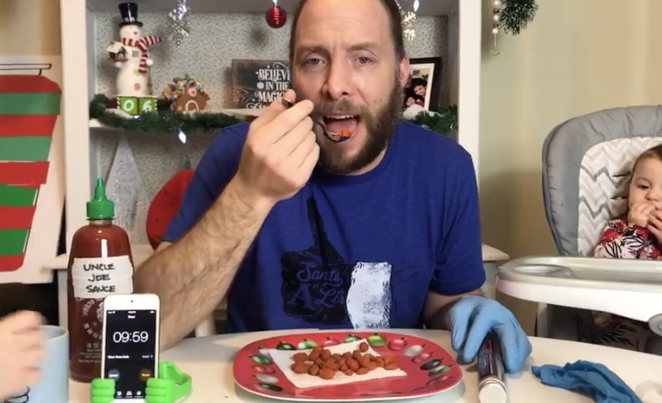 Dave McCloskey digs in to a plate of spicy hot peanuts for a challenge to raise money for the Coquitlam area food bank.Dave McCloskey/Facebook

It pays off to eat the world’s spiciest foods.

That’s what a Coquitlam man found when he ate some of the spiciest foods on the planet — over three consecutive Saturdays — to raise funds for Share Family and Community Services.

Dave McCloskey has brought in $17,750 via canadahelps.org from folks happy to see him writhe in pain when eating foods super high on the Scoville scale.

To get an idea of how high the stakes were in this Spice Up the Holidays and Fill the Foodbank Challenge, a jalapeño pepper is 8,000 on the Scoville scale; McCloskey ate peanuts that were 13 million and had to do so without relief, such as a glass of water, for 15 pain-filled minutes.

The Tri-City News asked McCloskey to describe what it was like to eat the spicy food and here’s what he had to say:

“I knew I could handle the Gummi at 9 million and the Deathnut Challenge that worked up five levels to 13 million Scoville. The Tube of Terror — 38 peanuts at 13 million was going to be a battle.

“I almost lost five minutes in, however, with everyone’s encouragement was able to get all the nuts in by the 10-minute mark and make the additional painstakingly slow five minutes for a 15-minute total. It was a crazy, messy and funny experience.”

McCloskey, who is also a Sasamat volunteer firefighter and dad, took up the challenge when he heard Share had great need over the holiday season and it was struggling because so many food drive events had to be cancelled due to the COVID-19 pandemic.

Recognizing that Share has twice the buying power with each dollar donated, McCloskey wanted to make sure vulnerable families had a good holiday this year.

Since starting his challenge, McCloskey has increased his original $5,000 fundraising goal and now hopes to raise $21,000 by Dec. 27.

He hopes to add to his current fundraising total on Boxing Day when he plans to shave his head and moustache at 7 p.m.