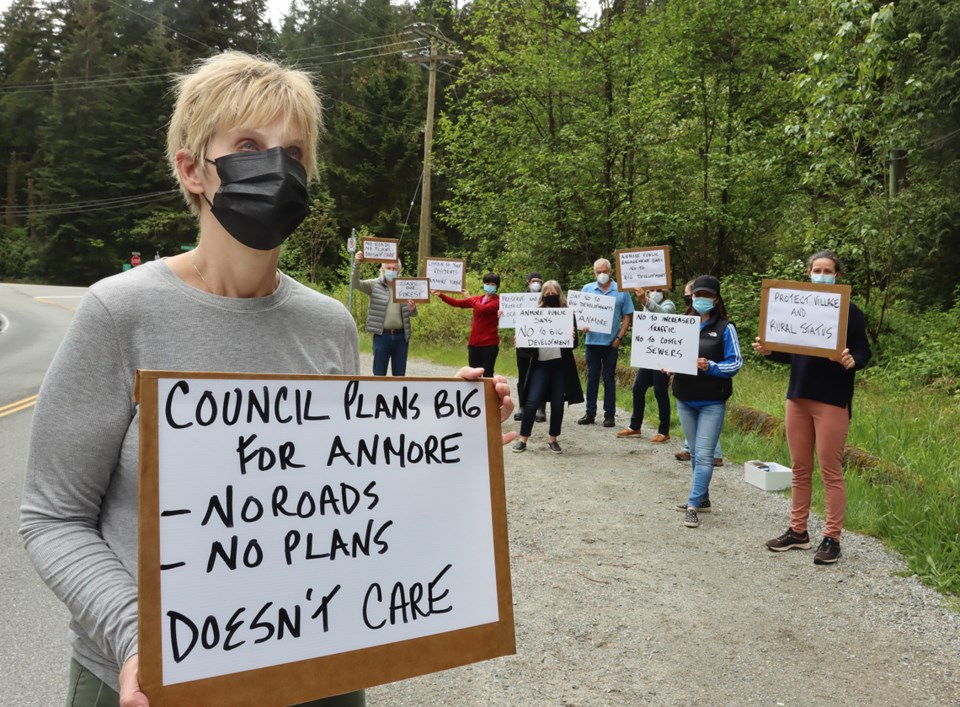 Meralee Guidi leads a contingent of Anmore residents opposed to a plan to redesignate a portion of the village from rural to urban.Mario Bartel

Summer has not quieted discussion among Anmore residents about how to proceed with a plan to consider urban designation for a 150-acre property.

In recent weeks, the village mayor has taken to posting concerns about comments he has seen on social media about a process to consider urban designation for Anmore South.

And a new group has formed opposing the proposed urban designation.

Meanwhile, the developer of Anmore South, formerly the Ioco lands, is weighing in with its own ideas of what could be built and asking residents for ideas.

All of this is taking place inside a village that most people only see when they drive to popular Sasamat and Buntzen lakes and visit the ocean in Belcarra Regional Park.

In a news release shared with the Tri-City News, the Save Anmore Coalition says urban designation of Anmore South could threaten access to important regional parks.

It would also be a “precursor to environmental degradation, clearcutting of trees, high-density development, overcapacity of our transportation routes,” the group states, and would place “insurmountable pressures on regional parks and lakes.”

The coalition has posted an online petition calling for the process to be halted and a referendum held during the next civic election asking residents if they want the lands designated to urban from rural.

It seeks to form a broader coalition, with like-minded people, including Port Moody residents.

But the village mayor says the coalition’s statement has inaccuracies.

To Mayor John McEwen, the release — distributed via Cision newswire — “sensationalized” the issue.

Pointing out there is no official proposal on the table, he said the village council only seeks to give residents more say on the future of the property.

Meanwhile, Icona Properties, which owns and will be developing the land, has taken out an ad in the Anmore Times newsletter, stating it plans to seek ideas for the property in the coming weeks.

“This is an opportunity to redefine the possible. We can support housing diversity that provides options for young families downsizing and aging in place,” the ad says.

“We can create a village heart that brings amenities closer to home.”

The ad also suggests that “one of the largest protected parklands in the Tri-City area,” could be created.

The statement is signed by Greg Moore, former Port Coquitlam mayor who is now the president and CEO of the company.

Moore helmed the city of PoCo from 2008 to 2018, chaired the Metro Vancouver board of directors from 2011 to 2018 and was recently appointed the chair of the BC Lottery Corporation (BCLC).

Meanwhile, the Save Anmore Coalition is hoping to get more people on its side.

The group seeks broader support in efforts to keep the property rural, arguing that development in Anmore South would cause “negative impacts” including reducing access to Buntzen Lake and Belcarra Regional Parks.

“This negative impact is due to the inevitable inaccessibility of parks, lakes such as Buntzen Lake, Sasamat Lake and White Pine Beach, Belcarra Regional Park and bumper-to-bumper traffic, which is already evident and quickly becoming a safety hazard.”

While those parks are already busy — and getting busier due to COVID-19 — McEwen said many visitors are coming from built-up communities outside the region, and that traffic studies would be done to determine the impact of any future development.