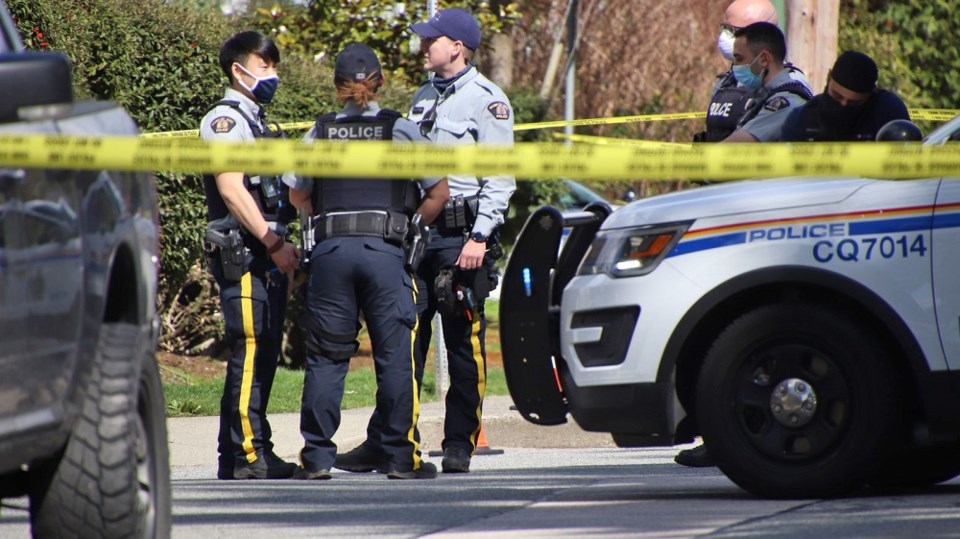 Shots were fired in the 1200 block of Howie Avenue at Gatensbury Street just before 11 a.m. Easter Sunday.Shane MacKichan

Shots rang out in a Coquitlam neighbourhood on Easter Sunday morning – the third local shooting in a week.

Shots were fired in the 1200 block of Howie Avenue at Gatensbury Street just before 11 a.m. Easter Sunday.

Coquitlam RCMP responded and when officers arrived, they found a male in the middle of the street suffering from gunshot injuries.

Coquitlam Fire and BCEHS attended to the victim and he was rushed to Royal Columbian Hospital with serious injuries.

RCMP have taped off the area for investigation.

According to several residents in the area, they all said they heard three shots and then a vehicle speed away onto Gatensbury.

This was the third Coquitlam shooting in a week after gunshots sent a man to hospital and provoked a massive police response at an apartment tower in Burquitlam Wednesday evening.

Coquitlam RCMP officers responded to shots fired in the 600-block of North Road at around 5:30 p.m. Wednesday.

When police arrived, they found a single male victim suffering a gunshot wound. He was treated and sent to hospital as police secured the scene, according to RCMP.

Police evacuated and barred residents from entering the Burquitlam Capital apartment tower at 691 North Road as a heavily armed RCMP Lower Mainland Emergency Response team entered the building, according to reports on the scene.

This is at least the fourth high-profile shooting in Coquitlam this year. On Tuesday, police responded to shots fired in the 300-block of Decaire Street in the Maillardville neighbourhood, finding a man suffering a gunshot wound when they arrived.

Within minutes, reports of a burned-out vehicle several blocks away prompted emergency fire units to douse a fully involved blaze as police units cordoned off the area and investigated any links to the shooting.

It’s not clear whether any of the four Coquitlam shootings this week are connected or whether they are linked to a rise in gang violence across the Lower Mainland.

In January, a drive-by attack in a Burke Mountain neighbourhood sent a man to hospital, and a shooting in a Burquitlam condo building a few days later — only 300 metres from the latest incident — provoked a similar massive response from the RCMP Lower Mainland Emergency Response team after a woman was found bleeding in the lobby.