The Integrated Homicide Investigation Team was consulted but did not take over the Trina Hunt missing person's case because it only does so in missing person cases where foul play is suspected, says the Port Moody Police Department
Feb 17, 2021 12:56 PM By: Diane Strandberg 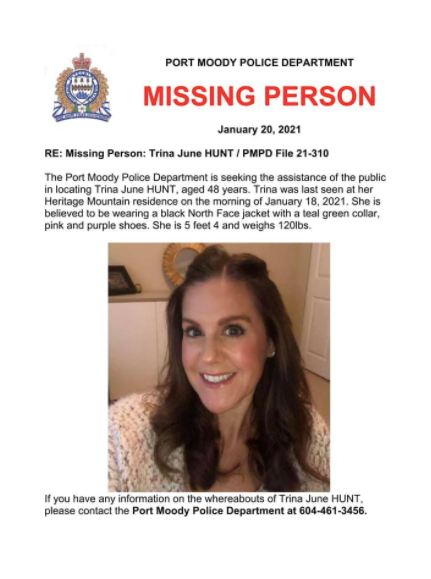 Efforts to find a missing Port Moody woman have so far failed to bear fruit, resulting in a press release by the Port Moody Police Department on the investigation to date.

The statement — emailed to media on Feb. 17, nearly a month to the day when Trina Hunt, 48,  was last seen on Jan. 18 — explains that police have pursued all “available avenues of inquiry” and even contacted the Integrated Homicide Investigation Team (IHIT).

However, IHIT did not take over the case because it only does so in missing person cases where foul play is suspected. “At this time, evidence indicates that this missing person case does not meet IHIT's mandate,” the press release states.

As well, it pursued leads from the public, including minute-by-minute examinations of recovered CCTV footage and numerous in-person interviews, according to the police department.

Still, the case remains unsolved. “To date, Trina remains missing and our investigation is active and ongoing,” the press release states.

Members of the family have not responded to the PMPD press release but a Facebook group dedicated to Hunt’s case sent out a video slideshow last Saturday and expressed disappointment that the woman had not been found.

“We are all experiencing the unique feeling of ambiguous loss. Grieving without closure. Searching without clues. We are grappling with despair and faint hope,” read a statement statement on the Facebook group Missing: Trina Hunt Last Seen in Port Moody BC Canada.

According to a poster that continues to be distributed, Hunt disappeared from her Heritage Mountain home on the morning of Jan. 18. She is believed to be wearing a black The North Face jacket with a teal green collar, pink and purple shoes. She is 5’4” and weighs 120 lbs.

Anyone with information regarding her whereabouts is asked to call the Port Moody Police Department at 604-461-3456.