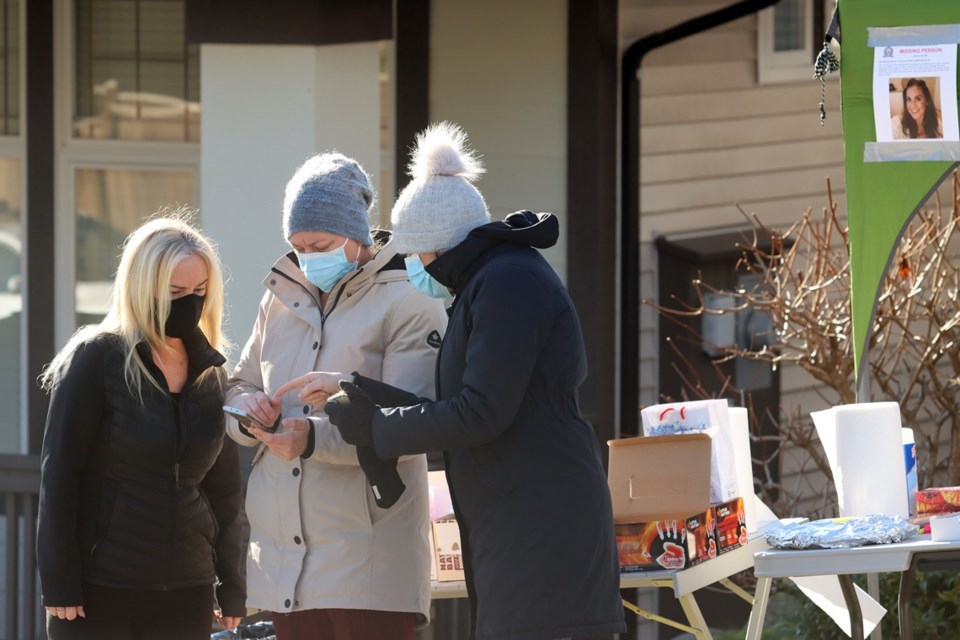 Port Moody community members joined a search for missing Trina Hunt in the early days after she went missing Jan. 18. Three weeks later there are no new details but social media posts have raised concerns about women’s safety in the Tri-Cities, prompting the RCMP to issue press releases asking people to report directly to them if they feel threatened and not to not share third party, uncorroborated reports of attempted abductions by people in white vans.Mario Bartel

An SFU criminologist says lack of information about an investigation into a missing Port Moody woman is creating a climate of fear and contributing to posts about abductions in the Tri-Cities and beyond.

This weekend Coquitlam RCMP asked people to cease posting third-party reports about white vans, asking people to make direct reports to police so they could be followed up.

Since then, a debate has raged on Tri-City social media groups and across Metro Vancouver about the difference between rumour mongering and community safety information.

But SFU’s Rob Gordon said that while social media posts — some recommending women arm themselves with self-defence key chains, wasp spray and tire irons — are understandable given the lack of updates on Trina Hunt, 48, missing from her Port Moody home since Jan. 18 and Shaelene Bell, 23, missing from Chilliwack, since Jan. 30, they aren’t helpful if they divert police resources.

SOCIAL MEDIA CAN BE 'VALUABLE'

“It most certainly can be a problem, one of the ways to calm everyone down is for authorities to issue bulletins,” said Gordon, who does research on missing people. “Social media can be very valuable, and has been used before to good effect, if it’s not properly stated it can have negative effects.”

Indeed, Port Moody Police have not issued an update on the case since Jan. 25, when a spokesperson told the Tri-City News that the investigation was “active and ongoing,” but would provide no further information about the investigation. (A Jan. 21 Trina Hunt press release is the most recent online)

Gordon said PMPD are likely playing their cards close to their chest to avoid jeopardizing the investigation. But while he sympathizes with the investigators’ position, he says people can’t be faulted for coming to their own conclusions.

“This has become overlapped with a couple of other missing women’s cases, and of course a good deal of observers pressed the panic button and now we’ve got a sober picture,” said Gordon.

Adding to the challenges, is that Metro Vancouver policing is governed by multiple jurisdictions, including RCMP and municipal police forces, Gordon said. And while he would like to see more open coordination and cooperation on missing people’s files, the criminologist added people should be encouraged to report credible information to police that might advance the Trina Hunt case.

While PMPD has been silent for weeks, BC RCMP have at least confirmed that the Trina Hunt investigation is not related and is separate from an investigation into the missing Chilliwack woman.

In the Coquitlam RCMP case, the original post inflamed many readers, especially on the RCMP Facebook page. Both Coquitlam RCMP and BC RCMP sent out their own clarifications aiming to reassure the public that there hasn’t been a surge in white van reports, abductions or missing persons.

Coquitlam RCMP’s Saturday statement followed days of social media posts, including at least five on the Port Coquitlam community Facebook page and one in a Port Moody Facebook group, in which women described situations where they felt they were being watched or followed by someone in a white van.

Most, but not all of those, posts have since been removed. Discussion continues to rage on Facebook, Reddit, the Tri-City News Facebook page and other online forums.

But RCMP spokesperson Cpl. Michael McLaughlin said his intention was to “address the most concerning claims in those social media posts, especially calls for people to arm themselves.

“We have heard from people who might be afraid to go for a jog, work a night shift or walk down the street on their own. We want to assure those people that your community is safe because there is no information to date that supports a spike or trend in attempted abductions,” he stated in a press release Sunday.

Pickton was a pig farmer, who owned property in Port Coquitlam where the remains or DNA of 33 women were found. Pickton was ultimately convicted of six murders.

WOMEN 'NEED TO BE HEARD'

“Women need to be heard. We have heard too many times that ‘it's under control’ when Pickton and Highway of Tears is happening. We have a right to be skeptical and not mocked for our genuine fears and concerns,” stated Courtney Cattfam on Facebook.

“Instead they’re trying to keep us quiet because they don’t want to scare everyone. That’s exactly what they told us when Olson and Pickton were murdering women.”

BC RCMP said the Coquitlam RCMP’s original statement wasn’t “meant to be disrespectful or dismissive of the pubic public’s concern” and it wanted to reassure the public that there is nothing to indicate that people are being abducted nor is there an increase in reported cases.

The Tri-City News has reached out to the Coquitlam RCMP for specific local reports from women feeling unsafe because of a white van and is awaiting a response. But the BC RCMP said reports about white vans and abductions in B.C. are few.

According to the latest BC crime trend data there have been three recent files, in which people were followed by a white van but there was no other interaction.

In a fourth file, under investigation, one male was reportedly forced into a white panelled van.

In four other cases, someone reported a white van in their neighbourhoods but did so after seeing similar posts on social media.

There were no links, trends or increases in missing persons, according to the BC RCMP.

Still, the topic of safety is an ongoing one on local Facebook groups, and a Port Coquitlam martial arts business is hosting a safety talk Friday, Feb. 12, with an RCMP officer offering to speak.

However, Ascension Martial Arts stated it didn’t want to spread fear but was offering the Zoom talk as a service to the community.