Huge, 'grumpy' corn snake dumped on the side of a road in Coquitlam

Landscaping crew finds metre-long corn snake and delivers it to Maple Ridge vet who posts a video slamming people who dump their pets when they get tired of them
Jan 25, 2021 12:25 PM By: Diane Strandberg 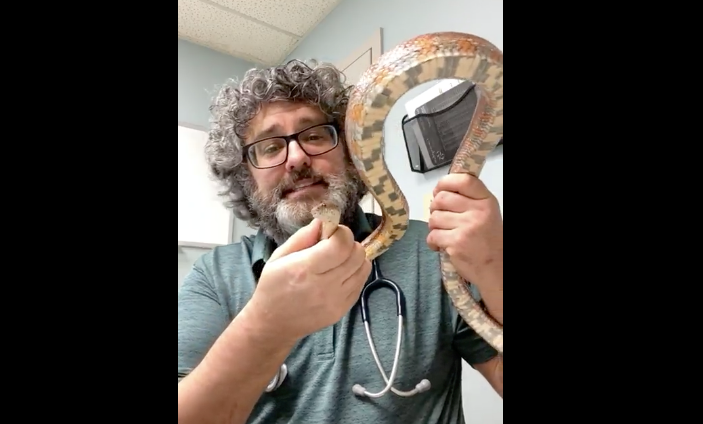 A Maple Ridge veterinarian is a “little bit surprised” that someone left a pet snake on the side of a road in Coquitlam.

Carefully holding a metre-long corn snake, Dr. Adrian Walton of the Dewdney Animal Hospital posted a video on his hospital Facebook page warning people not to “dump” pets when they get tired of them.

“Don’t dump animals in the wild,” he urged. “Find appropriate homes for them.”

Dr. Walton said the snake was found by a landscaping crew that spotted the reptile on the side of the road on Jan. 21 — a cool wet day with snow in the forecast.

“We are a little bit surprised that people are dumping snakes in Coquitlam,” he said, adding, “If you do recognize your snake that was found on the side of the road by a landscaping crew, kindly call us as Dewdney Animal Hospital at 604-467-1161.”

And if no one claims the snake, Dr. Walton said, it will be handed over to the BC Reptile Club for safekeeping.

Corn snakes are among the reptiles that people can purchase for sale at pet stores, and Dr. Walton said people should do their research before buying.

His concerns mirror those of the BC SPCA, which notes on its website that reptiles need proper care and attention and it’s not always obvious when they are sick or suffering.

Once fully grown, corn snakes can grow up to a metre-and-a-half in length and have a life span of up to five to 10 years. But released to the wild, reptiles are likely to die from exposure, starvation or predation, according to bcreptiles.ca.

It’s not unusual for corn snakes to go missing: When one called “Snake” disappeared from a guitar case in Victoria, police issued a press release.

According to Dr. Walton, research before purchasing a reptile should include joining the local BC Reptile Club. “They will be able to teach you how to properly take care of these animals, and once again, don’t dump animals.”

Throughout the video, the snake stayed calm except for one giant wriggle, at which point he opened his mouth. “He’s a little grumpy,” Dr. Walton commented before adding, “He just pooped on me — lovely.”