Salmonella being blamed for dozens of sick and dying birds taken to the Wildlife Rescue Association
Jan 8, 2021 7:30 AM 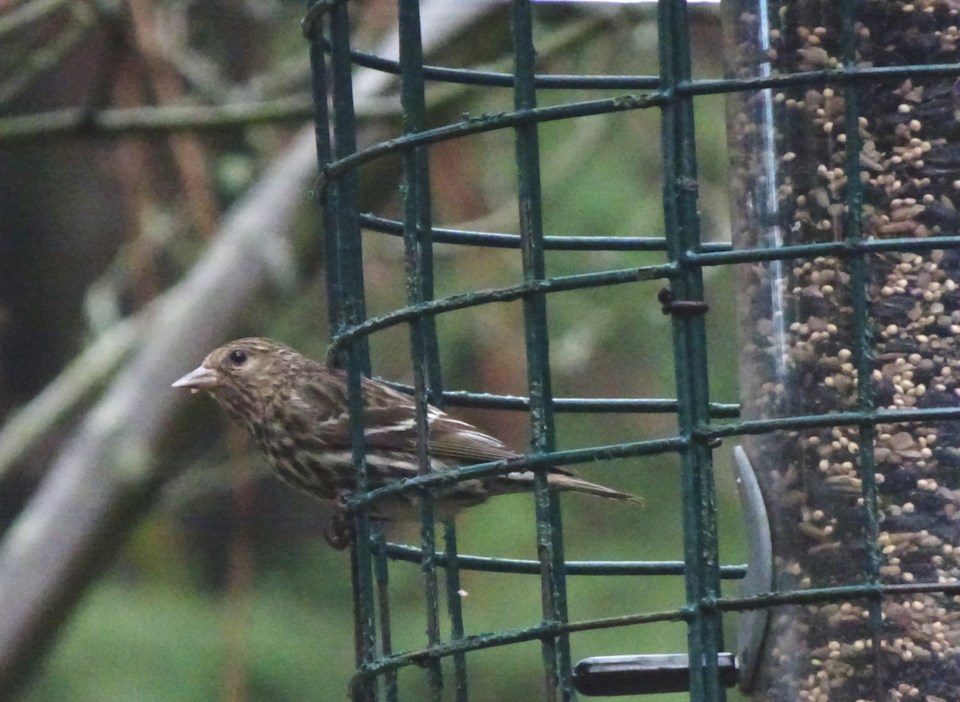 A pine siskin at a bird feeder from Wendy Seale-Bakes

A rampaging illness is attacking a tiny songbird that makes its home in Coquitlam, Port Coquitlam and Port Moody and dirty bird feeders are being blamed for the problem.

This week the Burnaby-based Wildlife Rescue Association called on people to take down their bird feeders to stop the spread of salmonella that is sickening the Pine Siskins.

Each winter, these nomadic finches range across North America in search of food.

However, in the past past few months, dense flocks of siskins have been seen across the Pacific Northwest, likely because of a shortage of food in the more northern range of siskins in Canada’s boreal forest.

The birds are getting some of their sustenance from bird feeders but the appearance of salmonella in some birds is prompting the Wildlife Rescue Association to call on people to take more care to prevent feeders from becoming a breeding ground for disease.

In fact, the association is suggesting the bird feeders be taken down until the middle or end of February when the flocks typically leave.

“Dense flocks are extremely vulnerable to disease outbreaks — when one gets sick, they all get sick. Sadly, that is exactly what Wildlife Rescue is currently seeing: many Pine Siskins have symptoms of salmonella, and they need our help,” the association notes in a press release.

Increased reports of sick and dying birds have been noted across the Pacific Northwest, from Oregon to British Columbia, including in the Lower Mainland.

Last year, the centre saw 127 sick Pine Siskins admitted to their facility — a 13-fold increase from what they saw in previous years.

In December alone, for example, 75 Pine Siskins were admitted and suspected to be infected with salmonella.

The problem has extended into the new year, with 36 Pine Siskins suspected of salmonella poisoning brought in exhibiting symptoms of salmonella, some with secondary injuries caused because of this illness, according to the association.

In recent weeks, Wildlife Rescue’s Support Centre is also dealing with an influx of calls from the community regarding sick and dying birds.

“People are finding large numbers of these songbirds lethargic, and too weak to fly away, symptoms consistent with salmonella poisoning,” the press release states, noting that while any bird can be impacted by salmonella, Pine Siskins seem to be most vulnerable.

This is potentially due to their social nature, flocking and feeding in close association with each other making it easy for the disease to be passed from bird to bird.

Salmonellosis is an infection caused by bacteria of the genus Salmonella. These bacteria primarily attack the digestive system, notably the throat, making it difficult for the birds to feed. The symptoms are not always obvious in wild animals, but infected birds may appear thin, fluffed up, and lethargic.

How you can help birds avoid disease:

Salmonellosis is primarily transmitted by fecal contamination of food and water by sick birds, although it can also be transmitted through bird-to-bird contact.

High traffic spots, such as bird feeders, create a source point of transmission and can exacerbate the spread of this deadly disease. Removing the feeders completely is the best solution to encourage birds to disperse, thereby minimizing the potential for infection. If you choose to keep your feeders up, they must be properly maintained to foster a healthy bird environment.

If you are experiencing sick birds at your feeder: remove the feeder for at least 14 days so birds will disperse and are less likely to be exposed to the infection.

• Consider taking down bird feeders or remove feeders that allow contact between fecal matter and food, such as platform feeders.

• Clean feeders with a 10% bleach solution (9-parts water to 1-part bleach) at least once a week, followed by careful rinsing and complete drying. Refill with fresh birdseed before reuse.

• Clean the ground below feeders of fecal matter and uneaten birdseed daily.

It’s important to note, Salmonella is a zoonotic disease, which means it is highly communicable to humans as well as other animals, our companion animals included.

Hand washing is recommended to prevent contamination, especially before handling bird feeders, or after touching a sick or dead bird.

If your pet ever comes in contact with a bird, monitor their behaviour closely for any signs of infection such as diarrhea, decreased appetite, and lethargy. If you ever have any concerns about their health, contact your veterinarian for advice.

If you find a Pine Siskin, or any wildlife, showing signs of distress or illness, please contact Wildlife Rescue’s Support Centre at (604) 526-7275.

If the bird was found near a feeder, it is important to take the feeder down for two weeks at minimum (longer if you are still seeing sick birds) and to thoroughly sanitize it.

If possible, it is best to take feeders down until the flocks leave, mid to end of February.

It is vital to remove sick birds from the environment to prevent the ongoing spread of this deadly disease, the Wildlife Rescue Association states.

2040
Search for missing Port Moody woman takes on ‘life of its own’
1579
'It's chaos': Massive search underway for missing Port Moody woman
1543
Everything you need to know about COVID-19 vaccines in B.C.
1206
'Administrative error' leaves some UBC students owing nearly $10,000 in tuition, due within days
952
'Clinically extremely vulnerable': Are you first in line to get vaccinated in B.C.?