Port Moody woman's family offering $50,000 reward for any details that lead to an arrest and charges; sign placed four days after IHIT searched through two homes.
Jun 12, 2021 10:00 AM By: Kyle Balzer 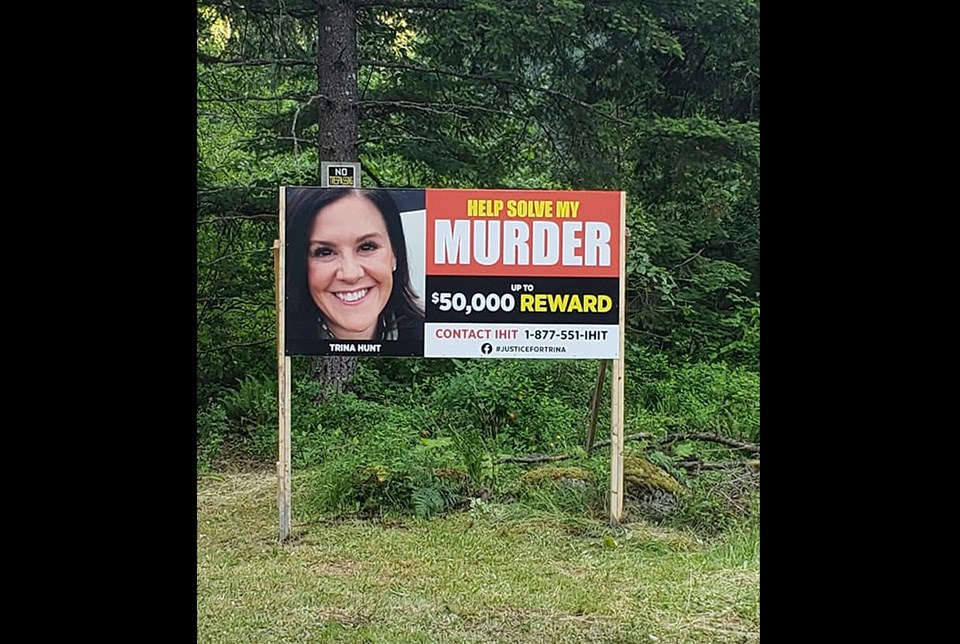 A large sign asking passersby to call for information on Trina Hunt's murder has been placed in the Silver Creek area south of Hope where the Port Moody woman's body was found on March 29, 2021.Facebook/Justice For Trina

That's what a community is hoping for as a large sign has been erected south of Hope this week asking anyone who drives by if they know information about the 48-year-old Port Moody woman's homicide.

On Thursday (June 10), a picture was posted to the Justice For Trina Facebook page of a four-by-eight-foot sign said to be installed off Silver Skagit Road — a north-south route towards Hope Mountain — in the Silver Creek area.

Silver Creek is where investigators say they found Hunt's deceased body on March 29 and say she and her husband Iain were staying there the weekend of Jan. 15, three days before she was reported missing to Port Moody police (PMPD).

The Justice For Trina group says the sign is in a "highly visible" area along the stretch of Silver Skagit Road.

The sign itself features Hunt's face on the its left side — the same portrait shared with the media on June 1 in a briefing with the Integrated Homicide Investigation Team (IHIT) — and the phrase "Help solve my murder" in big letters on the top right.

In medium-sized letters, it also shows the $50,000 reward the family is offering for any information that leads to an arrest and charges, the contact number for IHIT and the Facebook group's handle.

"Thank you to the Hope community for being so helpful, to Jamie Davis Transport for graciously allowing us to use their land, to Craig Kalancha for transporting and installing the sign and to The Detail Shop for creating this 4ftx8ft masterpiece," said group admin Sabeaner Jade in the post.

"Someone knows something and we hope that seeing Trina’s beautiful face will be the reminder they need."

Tri-City News reached out to IHIT this week for comment on any new information that's potentially come to light as well as the new sign placed in Silver Creek.

As of this publication (June 12), they've yet to respond to our request.

In the most recent update from investigators on June 6, a pair of search warrants were executed at two homes connected to Hunt, including her family's residence in Port Moody's Heritage Mountain neighbourhood.

The second was at a Mission home where it was reported a vehicle was taken into custody for evidence.

However, IHIT said no arrests were made and no further information was going to be provided.

That's a lot of money for information and IHIT described it as very generous when it was announced June 1 that members of Hunt's family were offering the reward.

"That really speaks to their motivation," said IHIT Sgt. Frank Jang, who also said the case was "progressing," but no new information was available at the time.

Four family members include Trina’s parents, Charles and Diana Ibbott, as well as her brother Brad and his wife, Jen.

They also issued a public plea to coincide with the $50,000 reward.

To the community, they stated they're grateful for the support and will continue to fight for answers to the 48-year-old’s death.

To the person(s) responsible, the family urges them to come forward and “take responsibility.”

“You have senselessly taken Trina’s life and have ruined so many others. Own up to your actions and accept the consequences. It’s the least you can do.”

You can watch the full statement in the video below, read by family spokesperson Stephanie Ibbott.

Updated: Digital sleuths and patchy information: A timeline into Trina Hunt's death
May 5, 2021 11:25 AM