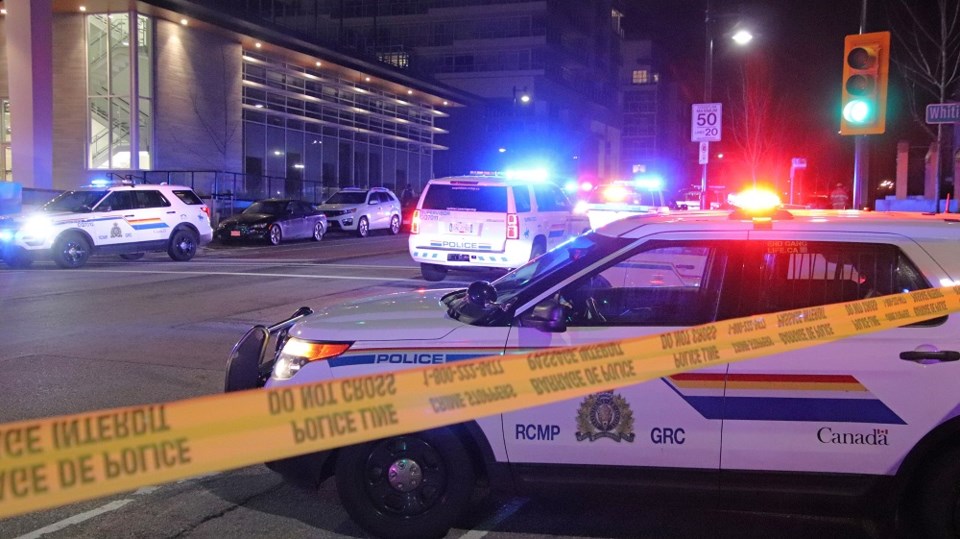 Police responded with a heavy presence outside 652 Whiting Way after reports of a shooting. Shane MacKichan

The Coquitlam RCMP has confirmed it has arrested a man in connection with an early morning shooting at an apartment on Saturday, Jan. 16 in the 600 block of Whiting Way.

According to police, a woman was found with non-life threatening injuries from a gunshot wound and was taken to hospital for medical assistance.

The Lower Mainland District Emergency Response Team was called to assist, RCMP stated in a press release, and a 31-year-old male was arrested without incident at the scene and remains in custody.

Two TransLink buses were brought in to keep residents warm while they waited for the investigation to be complete. TransLink has confirmed the buses were on site at Whitting Way and Foster Avenue from 2 a.m. to 6 a.m., at the request of police, to provide "warmth" for tenants of the building.

RCMP say the incident was isolated and there is no risk to public safety.

However, eyewitness reports at the scene said that RCMP Emergency Response Team units were seen outside the building at 652 Whiting Way and large sections of the sidewalk outside had been taped off by police.

The shooting, thought to have occurred just after midnight Saturday morning, Jan. 16, emptied the building just south of Burquitlam Station of residents after someone had triggered a fire alarm.

Residents were kept outside for hours while police officers dealt with any potential threats.

The weekend shooting was the second in the city in the past week. On Jan. 10, residents of a Burke Mountain neighbourhood were left in shock after a drive-by shooting sent one man to hospital and left the street littered in shell casings.

At the time, Coquitlam RCMP said it was unclear whether the Burke Mountain shooting was connected to a rise in gang violence seen across the Lower Mainland of late.