Port Coquitlam to add Peace, Dominion and McLean parks to its responsible drinking pilot in city parks; most survey respondents said being able to consume alcohol in parks contributed to community and reduced isolation, particularly during COVID-19 restrictions
Feb 17, 2021 1:16 PM By: Diane Strandberg 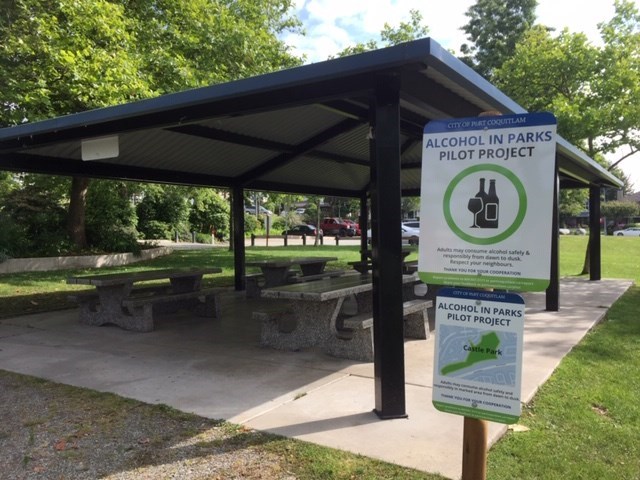 Responsible drinking in alcohol in Castle Park in Port Coquitlam will be permitted on an ongoing basis after a successful pilot.Diane Strandberg/File

Port Coquitlam’s popular alcohol in parks pilot has been made permanent and expanded after a spirited discussion about the benefits as well as the need for washrooms and litter cleanup.

Tuesday, council agreed to allow responsible consumption of alcohol in seven parks on a permanent basis and added three parks as a pilot so more adults would be able to drink alcohol in parks close to their home.

Since summer, drinking has been permitted in Castle, Settlers, Gates, Lions, Aggie, Evergreen and Cedar Drive parks, as a way of encouraging people to spend more time outdoors.

Buoyed by public approval in a survey, the city’s committee of council agreed to make the program a fixture at those parks and extend the pilot program to Peace, McLean and Dominion parks this year until Oct. 31.

According to the city’s mayor, concerns about rowdiness never materialized, and even Coquitlam RCMP was supportive of the pilot.

“It was a very positive thing, never did I experience any sort of rowdy behaviour or hooliganism,” Mayor Brad West told council. “Who it was, taking advantage was largely families, which is what I would have expected.”

Parks became places to celebrate family milestones, council was told, and one man even had his wedding at Lions Park, when COVID-19 made it impossible to hold a party indoors.

Almost nine out of 10 people who filled out a survey supported the pilot, with responses that indicated the initiative helped to make people feel part of their community and less isolated.

LITTER ISSUE TO BE HANDLED WITH MORE PICK UPS

However, while booze in parks was supported by all Port Coquitlam councillors, some expressed concerns about litter and availability of washrooms at the new parks.

“I saw a lot more alcohol containers discarded,” said Coun. Dean Washington, “Are we going to monitor or are we going to be proactive?”

The availability of washrooms at Peace Park, Dominion and McLean park was also raised. Though the use of portable washrooms wasn’t supported, West suggested staff would look at options.

Adding more service to McLean washrooms outside of times when its used by baseball teams would add more costs to the city’s budget, it was noted. As well, it was suggested that those purchasing their alcohol at breweries close to Dominion and Peace parks might be able to use those washrooms or their own homes.

In a press release, the city acknowledged that it would be stepping up garbage pick up in the parks as needed, noting that all city parks had more litter because they were used more by the public during the year.

Coun. Steve Darling, the designate for public safety, further noted in a press release that the responsible drinking in parks initiative will be closely monitored by parks and bylaw staff.

To make the changes, a bylaw amendment will come before council in early March, and, as with last year’s pilot, signs will be posted at the three trial sites — Peace, McLean and Dominion Parks — and feedback will be collected through an online survey at portcoquitlam.ca/alcoholpilot