The family of Trina Hunt is expressing gratitude to Metro Vancouver residents this week
May 14, 2021 10:56 AM By: Diane Strandberg 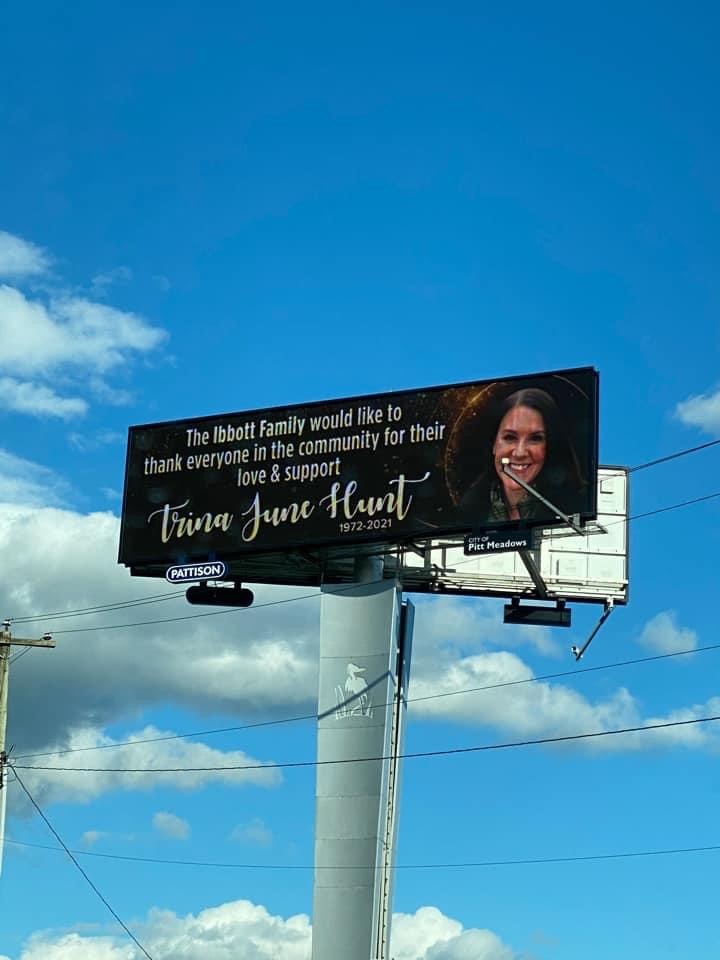 One of several signs in memory of Trina Hunt posted in key locations in Metro Vancouver.Submitted

The family of Trina Hunt is expressing gratitude to Metro Vancouver residents this week for their support in a visible way.

For the entire week, digital billboards with images of Hunt — who went missing from her Port Moody home Jan. 18 and whose remains were found in Hope, B.C. — have been expressing thanks to the community.

Jennifer Ibbott, who is Hunt’s sister-in-law, confirmed the digital billboards have been placed in strategic locations including: four in Port Moody, one in Pitt Meadows and one near the Port Mann Bridge.

Pattison Outdoor Advertising confirmed to the Tri-City News that the space was donated on the billboards and the messages will be on display for the rest of the week.

The message, which includes a photo of Hunt and her full name — Trina June Hunt — with the years of her birth and death also noted, comes at a difficult time for the family, as Hunt's remains were found in Hope and police suspect foul play.

Ibbott wrote on the Justice for Trina Facebook page that “feelings of positivity have all but faded right now,” and family members “still can’t comprehend how this nightmare has become our reality.”

The goal of the billboards, according to Ibbott, is to encourage people to “take a moment to send your thoughts, prayers, and positive vibes our way for swift answers and for justice for Trina.”

There has been no further word from investigators since the Integrated Homicide Investigation Team (IHIT) announced May 1 it had identified the remains of Hunt.

Police say a body was found in the Silver Creek area of Hope on March 29.

Roughly a month after discovering the unidentified remains, IHIT said it had worked with the BC Coroners Service to determine that they are the missing Port Moody woman. The homicide unit, which takes over in the case of suspected foul play, is treating the death as a murder investigation.

Hunt was reportedly last seen in her Port Moody home on the morning of Jan. 18 when her husband left for work. Her disappearance triggered a massive community search, scouring her neighbourhood’s streets and forested trails.

Updated: Digital sleuths and patchy information: A timeline into Trina Hunt's death
May 5, 2021 11:25 AM