'Keep their memories alive,' says Mahda Jahromi, a lecturer in Sustainable Energy Engineering, seeking commemorative efforts to remember the victims of Flight 752 that was shot down Jan. 8, 2020
Jan 8, 2021 1:26 PM By: Diane Strandberg 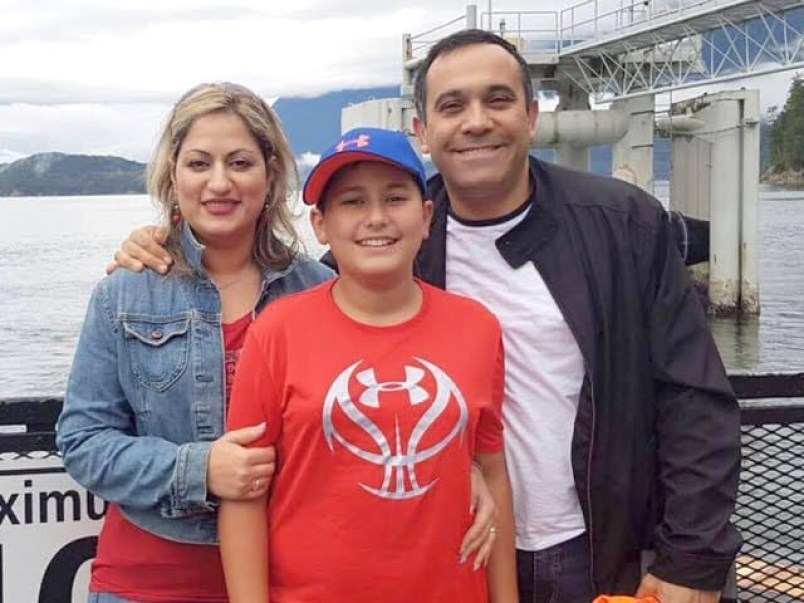 Ardalan Ebnoddin-Hamid, his wife Niloofar Razzaghi and their 15-year-old son, Kamyar Ebnoddin-Hamidi of Port Coquitlam were among 176 people killed aboard Ukraine International Airlines Flight PS752 when the Iranian military shot down the plane shortly after takeoff from Tehran on Jan. 8, 2020.Facebook

A chance meeting with a Port Coquitlam man who died on Ukraine International Flight 752 has left an SFU lecturer grief-stricken and looking for ways to commemorate Canadian victims of the Jan. 8, 2020 tragedy.

Mahda Jahromi, a lecturer in Sustainable Energy Engineering, has helped launch a scholarship at SFU in the name of the flight’s 176 victims, who all perished when the jetliner was shot down by Iranian armed forces shortly after take-off from Tehran.

Jahromi had met Ardalan Ebnoddin-Hamidi, one of his wife’s colleagues, at a Christmas party, just weeks prior to the crash and remembers a happy man and father content with his life.

The half-hour conversation came to Jahromi’s mind immediately after learning that Ebnoddin-Hamidi, his wife, Niloofar Razzaghi, and son, Kamyar — a Riverside secondary student — died in the crash.

“Him and his family basically went away in a second,” Jahromi recalls, remembering how he identified so closely with Ebnoddin-Hamidi, having immigrated to Canada from Iran in 2012 and, like Ebnoddin-Hamidi, left behind beloved family members.

Jahromi said he’s taken the same route via Ukrainian airlines himself to visit his mom and dad, a trip many Iranians call the ‘Good-bye tour,” and could have been on the plane that was shot down.

For weeks after the Tehran plane crash, Jahromi sought ways the victims could be remembered, reaching out to academic colleagues at BCIT, UBC, the University of Victoria as well as SFU, noting that many of the Canadian victims had ties with university or college institutions.

“And anybody I was speaking to they wanted to do something. The social media was the easiest platform to express the anger, sorrow and sadness. There was waves of things happening on social media.

“But at the time the only thing that was on my mind was to keep their memories and their names alive somehow. I did not not want these people to be forgotten 10 or 20 years from now.”

Among the ideas that were considered were a monument and a commemorative event. But the first, although still a possibility, is time consuming to achieve. The second had to be cancelled because of COVID-19.

Jahromi hopes a commemorative event can still be held once the coronavirus is reduced or eliminated as 300 people had committed to attending.

But what did come out of a year of discussions is the scholarship for post-secondary students, thanks to the help of some prominent Iranian-Canadians like the Eshghi brothers, executives of the Djavad Mowafaghian Foundation. In a meeting with the foundation, the Eshghi brothers agreed to generously donate to UBC, SFU and other universities for the creation of scholarships commemorating the victims of Flight 752.

Jahromi says it’s his hope that the scholarship, along with additional commemorative events, will ensure that people like Port Coquitlam’s Ardalan Ebnoddin-Hamidi will not be forgotten in the coming decades.

“It’s too big to let go,” Jahromi told the Tri-City News. “The pain is still there. Even though I only knew people on the plane — they weren’t my close relatives — it’s so immense, that when you look at their pictures you are reliving it again.

“I’m thinking if it has touched me this much and how much has it affected the remaining families? The worse thing is thinking you are eventually forgotten.”

‘They are the murderers’: Families seek justice one year after flight shot down over Tehran
Jan 7, 2021 7:15 AM

2096
Search for missing Port Moody woman takes on ‘life of its own’
1626
'It's chaos': Massive search underway for missing Port Moody woman
1582
Everything you need to know about COVID-19 vaccines in B.C.
1300
'Administrative error' leaves some UBC students owing nearly $10,000 in tuition, due within days
969
'Clinically extremely vulnerable': Are you first in line to get vaccinated in B.C.?