Tri-Cities COVID-19 cases were second worst in the region last week, but are they slowing?

The ongoing high case count comes amid a surge in schools with COVID-19 exposures and concerns about variants; BC Centre for Disease Control says only Surrey had more cases than the combined region of Coquitlam, Port Coquitlam and Port Moody
Feb 25, 2021 1:53 PM By: Diane Strandberg 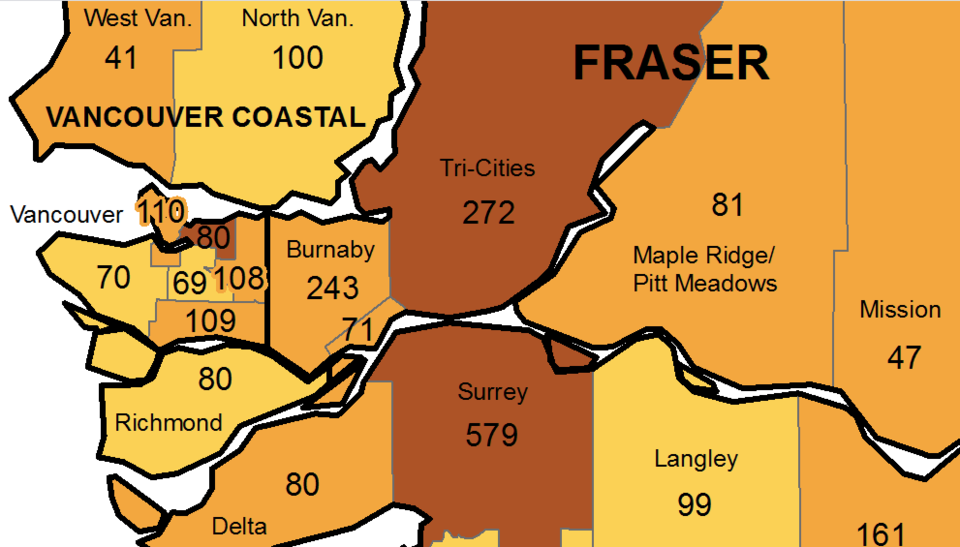 The Tri-Cities continues to be a hot spot for COVID-19 as more cases were identified in the area covering Coquitlam, Port Coquitlam and Port Moody last week than anywhere else in Metro Vancouver — except Surrey.

In its latest map of COVID-19 in the region, the BC Centre for Disease Control flagged the Tri-Cities as having  272 cases between Feb. 14 and Feb. 20.

Surrey, where seven schools were identified as having cases of the U.K. variant, had 579 cases.

But even with 272 positive test cases last week, the rise COVID-19 cases in the Tri-Cities seems to have levelled off as the previous week had 269 cases identified.

However, the cases over the last two weeks represent a huge jump compared to the first week in February, when 109 people tested positive for COVID-19 in the region.

The ongoing high case count comes amid a surge in schools with COVID-19 exposures.

This week saw as many as 35 schools flagged for coronavirus, including public and private schools across the three cities Wednesday.

Scott Creek middle school in Coquitlam was one of the hardest hit with multiple days of exposures and where a Grade 8 class was ordered to isolate for 14 days.

On Tuesday, parents were sent a letter from Fraser Health about exposures at the school on Feb. 17, 18 and 19 but the exposure website hasn’t yet been updated to reflect all those dates.

The Tri-City News has reached out to Fraser Health for more information about cases at the school.

In a letter to parents, principal Lisa Rinke said students in the isolating class could return to school following the isolation period on March 1. In the meantime, they are doing their school work remotely.

Tomorrow (Feb. 26) is a professional development day in School District 43.

The virus has also hit Tri-City businesses this month.

In what appears to be a super-spreader event at a Port Moody pub, dozens of cases appear to be linked to a recent trivia night. Other businesses include a Port Moody Shoppers Drug Mart as well as a Safeway and two Real Canadian Superstore locations in Coquitlam.

The contagion has also made its way into a local hockey league: Last week, the Port Moody Amateur Hockey Association revealed four of its players had tested positive for the coronavirus, prompting the league to pause its season. However, a parent says there were more cases, including nine cases on her son’s team.

Meanwhile, provincial health officials continue to be concerned about variants of concern, including the U.K. virus which turned up in screening of positive COVID-19 cases at Surrey schools. "As part of our continued efforts, we are paying close attention to the variants of concern to understand their effects on our province and our communities,” Dr. Bonnie Henry said in a statement this week.

On Monday, she revealed there were are 28 new confirmed cases of COVID-19 variants of concern in the province, for a total of 101 cases and two cases of variants that are under investigation. Of the total number of cases at the time, four were active and the remaining 97 have now recovered.

Here’s how many cases she identified :

Of these confirmed cases, 58 were listed as being in in Fraser Health, 38 in Vancouver Coastal Health, four in Island Heath and three in the Interior Health regions.

Daily numbers of variants are not reported, however, more screening of variants is taking place, rising from 70% to 100% in the coming days.

"It is our individual efforts that slow the spread of COVID-19 and our collective efforts that will see us through this pandemic. No matter the variant, the measures we take to stop the spread are exactly the same. Let's do our part today to break the chains of transmission in our province,” Henry stated.